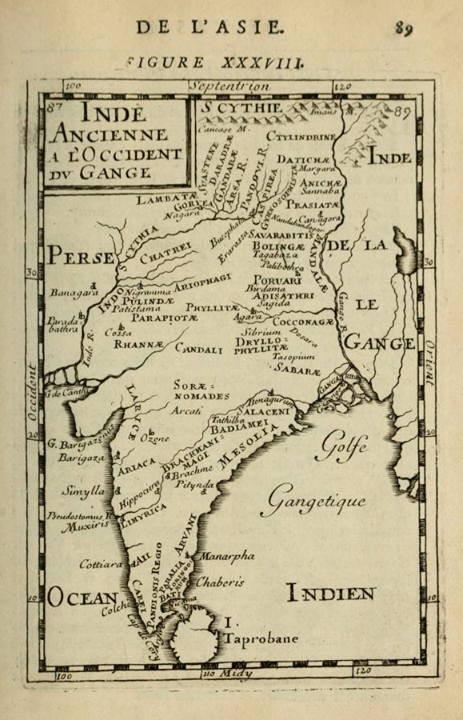 
Alain Manesson Mallet (1630–1706) was a French cartographer and engineer. He started his career as a soldier in the army of Louis XIV, became a Sergeant-Major in the artillery and an Inspector of Fortifications. He also served under the King of Portungal, before returning to France, and his appointment to the court of Louis XIV. His military engineering and mathematical background led to his position teaching mathematics at court.[1]

His Description de L'Universe contains a wide variety of information, including star maps, maps of the ancient and modern world, and a synopsis of the customs, religion and government of the many nations included in his text. It has been suggested that his background as a teacher led to his being concerned with entertaining his readers. This concern manifested itself in the charming harbor scenes and rural landscapes that he included beneath his description of astronomical concepts and diagrams. Mallet himself drew most of the figures that were engraved for this book.

Fascinating in the accuracy of its shape. I'm just wondering about the names of the places - where did those come from?

For the accuracy of the shape of peninsular India in European cartography, we have to thank Germany's Martin Waldseemuller ( the man who named America !) & the Italian duo of Ruscelli/Gastaldi. They are the first to correct Ptolemy's maps ( Table 9,10,11) which missed the peninsula. Alain Mallet follows in the tradition of the great French cartographers - Sanson, Duval, Jailliot family, who set the discipline for de Fer, D'Isle & of course the best cartographer of India before scientific mapping arrives, d'Anville. Like the best cartographers of the world, none of them were travellers who actually visited India. Their job in the era of exploration was to distill fact from fiction. This map of Mallet is labelled "Ancient India" , a new norm which came up in European cartography of the time to make a distinction between information pre & post vasco da Gama's rediscovery of the sea route to India. The cities mentioned on "Ancient India" maps largely have Ptolemy's 2nd century "Geographia" , as their source. The names/spellings reflect the latin edition names - Badamei is Badmer ; Adisotra is Ahichhatra; Bucephalia - site where Alexander's horse died in Pakistan etc etc. Alain Mallet clearly had the first East India co. map of Baffin/Roe or its copy by Blaeu with him, when he made this map. The errors of Thailand's Chiang Mai lake as a major source of Indian rivers & also its geographic location, can be seen here quite clearly.

Earliest course of the Brahmaputra mapped circa 1770 only. James Rennell's Bengal Atlas of 1780 has the first map of it. You should be able to google it out ...

I could see Muziris on the West Coast but more marked more towards the north than it is. I am eager to know what could be the present coastal towns marked here as "Manarpha" and Chaberis".