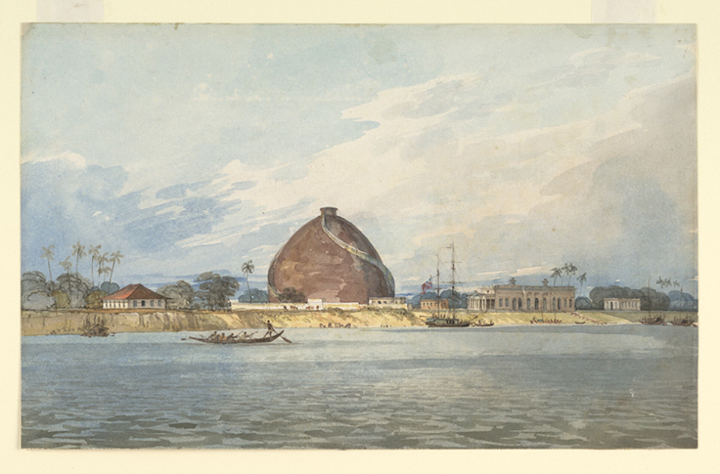 The Ganary (Golghar) at Bankipur, near Patna (Bihar) seen from the river - 1814

Watercolour by Robert Smith (1787-1873) of the granary ('gola') at Bankipur, near Patna in Bihar, seen from the river with European officials' houses near by, dated 1814-15. The image is inscribed on the original mount in pencil: 'Grain Golah at Bankipoore near Patana'. Throughout the 1770s and early 1780s there had been a number of years during which crops failed and led to disastrous periods of FAMINE. This huge granary was built by Captain John Garstin in 1786 and was intended to store grain for those times, but unfortunately the building was found to be unsuitable for its purpose. The design, based on indigenous storehouses for grain and salt, consists of a series of concentric circles forming the thick walls of the large globe, which has two symmetrical spiral staircases winding around it leading to the central opening at the top.

visited it this August

Hello, Here is a modern photo of the same building http://www.bihartrip.com/wp-content/uploads/2013/07/golghar.jpg It is quite unlike any British buildings that I am aware of, from the period in the UK. Was Captain John Garstin modelling this building on Indian buildings or was it an original idea? Were any other buildings like this built? Regards Nick Balmer

Me too what view still remember :)

Nick , this was a Stupa style architecture and many such structures exist in Inida. I wonder if Lutyens had this in the back of his mind when he designed the current President's House. An interesting fact about the building above...this granary was never filled to its capacity. Overlooked during its construction, the doors of the granary opened inwards. Note the flight of stairs...the coolies would carry grain bags up this passage, drop the delivery through the opening on the top and then descend via another flight of stairs (opposite end).

I live nearby.... play cricket in its compound .. crack peanuts on its top on Sunday evenings with friends... & surprised that even in those days.. it was not much whiter in colour....

arindam has a very interesting observation

Just an experiment in Acoustics, actually. Construction costs justified as a granary. Love the view from the top, especially during the monsoons - great place to see the Ganga in full flow. C V Raman got it right ( see -> http://compasswallah.tumblr.com/post/61006907234/the-spiral-dome-of-bankipore )