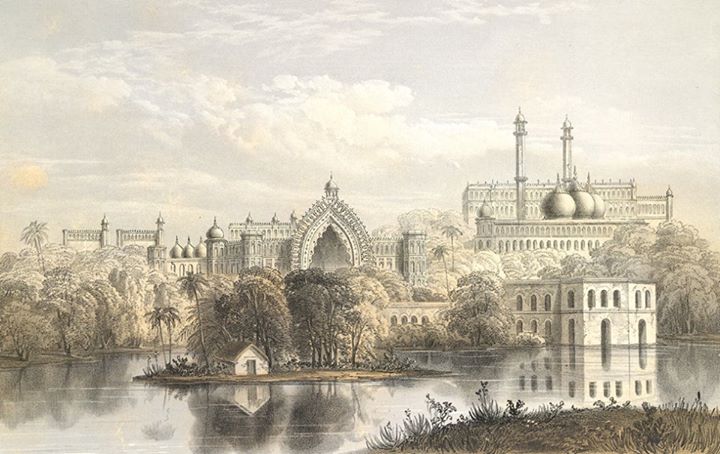 View of the Great Imambara and the Rumi Durwaza, from Moosah Bagh end of the city, Lucknow - 1860

This lithograph is taken from plate 26 of 'General Views of Lucknow' by Sir DS Dodgson.

The Great Imambara, which Dodgson described as the "architectural gem of Lucknow", has one of the largest vaulted halls in the world - nearly 50 metres (or 163 feet) long and 15 metres (49 feet) high. As a whole, it is one of India's most splendid edifices. An imambara is a building in which the festival of Muharram is celebrated, and can sometimes be used as a mausoleum, as here. Imambaras are usually dedicated to the three imams: Ali, Hassan and Hussein. Nawab Asaf-ud-Daulah, who lies inside its main hall, undertook its construction as a FAMINE RELEIF measure in 1784. It was designed by the architect Khifayatullah.

The Rumi Darwaza or Turkish Gate stands adjacent to the Imambara and was also constructed in 1784. It is built in the form of a sliced dome, lavishly ornamented.

Viewed together the two edifices present a fantasy vision of Oriental splendour.

The construction started with the idea of Food-for-work. After famine struck Awadh , Nawab Asaf ud Dhaula thought of this plan to provide food to his subjects against employment for cconstructing the Bara Imambara.

It is said in Lucknow that a popular slogan in those days was' jis ko na de Maula-usko de Asafud daula!

Shame, we failed to preserve this.