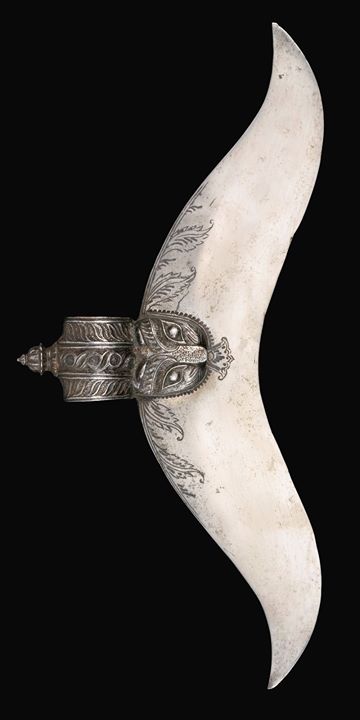 Sotheby’s London will introduce its first-ever auction dedicated to art from Imperial India.

Over 90 exquisite objects exemplifying the broad artistic traditions of Imperial India will be presented for sale, including works relating to Tipu Sultan.

Benedict Carter, Director, Head of Auction Sales Middle East said: “Following the success of previous sales of Indian Art including the record sales of Stuart Cary Welch’s collection in April and May 2011, Sotheby’s will introduce its first-ever sale of ‘Art of Imperial India’ this autumn.

"The sale will include works of museum quality, rarity and beauty spanning five centuries. With this diversity we have already attracted a great deal of international interest”.

The steel blade of gently curving form, engraved with foliate motifs near shoulder with remnants of gilding, the mount composed of two tiger-heads biting either side of the blade with a cylindrical fitting chiselled with a bubri design.

Shame shame we dont have treasures which belong to us in our own country but exploited and sold world wide by someone else.

Agree with kara tho u must visit Natl Museum and Salarjung. Its ironic that former colonials are trying to sell back the loot.

It pains my heart to see plunder on sale!

Have you seen the nick in the upper half? Many heads it must have severed.