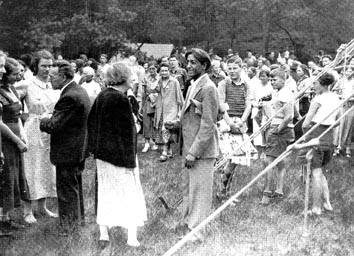 Jiddu Krishnamurti during the annual Star Camp at Ommen, the Netherlands, on August 3, 1929.

Break with the past:

Over the next few years, Krishnamurti's new vision and consciousness continued to develop. New concepts appeared in his talks, discussions, and correspondence, together with an evolving vocabulary that was progressively free of Theosophical terminology. His new direction reached a climax in 1929, when he rebuffed attempts by Leadbeater and Besant to continue with the Order of the Star.

Krishnamurti dissolved the Order during the annual Star Camp at Ommen, the Netherlands, on August 3, 1929. He stated that he had made his decision after "careful consideration" during the previous two years, and that:

I maintain that truth is a pathless land, and you cannot approach it by any path whatsoever, by any religion, by any sect. That is my point of view, and I adhere to that absolutely and unconditionally. Truth, being limitless, unconditioned, unapproachable by any path whatsoever, cannot be organized; nor should any organization be formed to lead or coerce people along a particular path. ... This is no magnificent deed, because I do not want followers, and I mean this. The moment you follow someone you cease to follow Truth. I am not concerned whether you pay attention to what I say or not. I want to do a certain thing in the world and I am going to do it with unwavering concentration. I am concerning myself with only one essential thing: to set man free. I desire to free him from all cages, from all fears, and not to found religions, new sects, nor to establish new theories and new philosophies.

Following the dissolution prominent Theosophists turned against Krishnamurti, including Leadbeater who is said to have stated, "the Coming had gone wrong." Krishnamurti had denounced all organized belief, the notion of gurus, and the whole teacher-follower relationship, vowing instead to work in setting people "absolutely, unconditionally free."There is no record of him explicitly denying he was the World Teacher;whenever he was asked to clarify his position, he either asserted that the matter was irrelevant,or gave answers that, as he stated, were "purposely vague."

In reflection of the ongoing changes in his outlook, he had started doing so before the dissolution of the Order of the Star. The subtlety of the new distinctions on the World Teacher issue was lost on many of his admirers, who were already bewildered or distraught because of the changes in Krishnamurti’s outlook, vocabulary and pronouncements–among them Besant and Mary Lutyens' mother Emily, who had a very close relationship with him. He soon disassociated himself from the Theosophical Society and its teachings and practices,yet he remained on cordial terms with some of its members and ex-members throughout his life.[

Krishnamurti would often refer to the totality of his work as the teachings and not as my teachings.

Krishnamurti resigned from the various trusts and other organizations that were affiliated with the defunct Order of the Star, including the Theosophical Society. He returned the money and properties donated to the Order, among them a castle in the Netherlands and 5,000 acres (20 km2) of land, to their donors. He spent the rest of his life holding dialogues and giving public talks around the world on the nature of belief, truth, sorrow, freedom, death, and the quest for a spiritually fulfilled life. He accepted neither followers nor worshippers, regarding the relationship between disciple and guru as encouraging dependency and exploitation. He accepted gifts and financial support freely offered to him by people inspired by his work, and continued with lecture tours and the publication of books and talk transcripts for more than half a century.