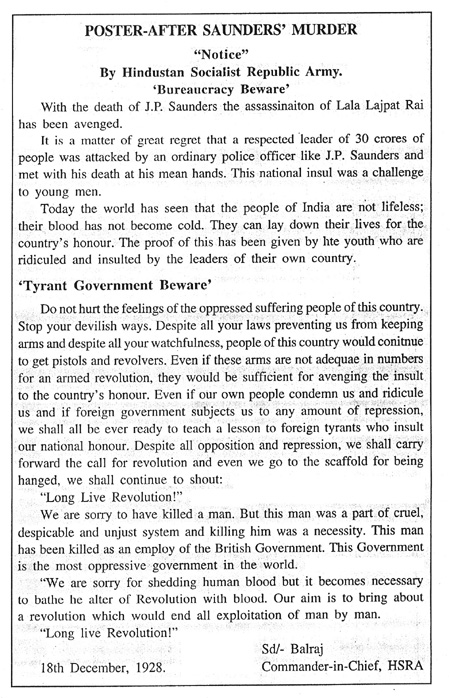 This notice was pasted after the killing of J. P. Saunders, Deputy Superintendent of Police, Lahore, on December 17 in broad daylight, in front of the SSP’s office in the city. Saunders had ordered his men to hit Lala Lajpat Rai with lathis on October 30, 1928, when the latter was leading a large procession against the Simon Commission. Lala Lajpat Rai died on November 17 and the HSRA decided to avenge this ‘national humiliation’.

Exactly a month later, Saunders was killed and this notice appeared on the walls of Lahore. The notice was handwritten by Bhagat Singh and was later produced as an exhibit in the court. The notice declares in bold letters —"J.P. Saunders is killed; Lala Lajpat Rai’s (death) is avenged." The text of notice says: "Really it is horrible to imagine that so lowly and violent hand of an ordinary police official, J. P. Saunders, could ever dare to touch in such an insulting way the body of our (leader) so old, so revered and so loved by 300 million people of Hindustan and thus cause his death. The youth and manhood of India was challenged by blows hurled on the head of India’s nationhood."

The subhead of notice reads: "Beware ye tyrants; beware." The notice warns the British not to "injure the feelings of a downtrodden and oppressed country. Think twice before perpetuating such a diabolic deed."

The third subhead says: "Long live revolution." This section states: "Sorry for the death of a man. But in this man has died the representative of an institution, which is so cruel, lowly and so base that it must be abolished. In this man has died an agent of the British authority in India — the most tyrannical of government of governments in the world." The last paragraph of the notice reads: "Sorry for the bloodshed of a human being; but the sacrifice of individuals at the altar of the revolution, which will bring freedom to all and make the exploitation of man by man impossible, is inevitable."