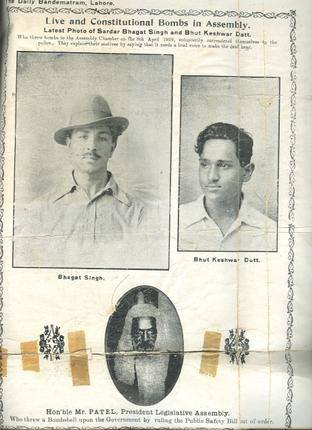 Article:
Rare documents on Bhagat Singh's trial and life in jail
By Chaman Lal
The Hindu - 2011

Digitalised records with the Supreme Court reveal some inspiring facets of the revolutionary. Bhagat Singh and B.K. Dutt offered themselves for arrest after throwing harmless bombs in the Central Assembly to 'make the deaf hear.' Their case drew worldwide attention.

When the Supreme Court of India established a museum to display landmarks in the history of India's judicial system, it also put on display records of some historic trials. The first exhibition that was organised was the ‘Trial of Bhagat Singh.' It was opened on September 28, 2007, on the occasion of the birth centenary celebrations of one of the most significant among martyrs and popular heroes. Noorul Hooda, Curator of the Museum, and Rajmani Srivastava of the National Archives worked to collect documents, items like bomb shell remains, pictures and publications. Not all of what was collected could be displayed in the exhibition. In 2008, the Supreme Court digitalised the exhibits. Some of Bhagat Singh's rare writings thus came to light for the first time since he was executed on March 23, 1931 at the Lahore Central Jail along with Rajguru and Sukhdev. How the three young patriots were put to judicial murder, is brought out by the eminent legal scholar, A.G. Noorani, in his book, The Trial of Bhagat Singh — Politics of Justice.

The most significant part of Bhagat Singh's life is that spent in jail since his arrest on April 8, 1929 from the Central Assembly in Delhi, where he and B.K. Dutt offered themselves to be arrested after throwing harmless bombs in the Assembly to ‘make the deaf hear.' They faced two trials. The first was in the Delhi bomb case. It started on May 7, 1929 in Delhi and was committed to the Sessions Judge, on charges under Section 307 of the Indian Penal Code and the Explosives Act. That trial started in June. Bhagat Singh and Dutt made a historic statement on June 6. Dutt was represented by the nationalist counsel Asaf Ali. Bhagat Singh fought his own case with the help of a legal adviser.

On June 12, in less than a week, both were convicted and transported for life. From the June 6 statement to his last letter to his comrades written on March 22, 1931, a day before his execution, Bhagat Singh read and wrote so much: one can only marvel at the explosion of talent at the age of 21 years-plus. He wrote letters to family members and friends, jail and court officials, and penned major articles including Why I am an Atheist, Letter to Young Political Workers, and Jail Notebook.