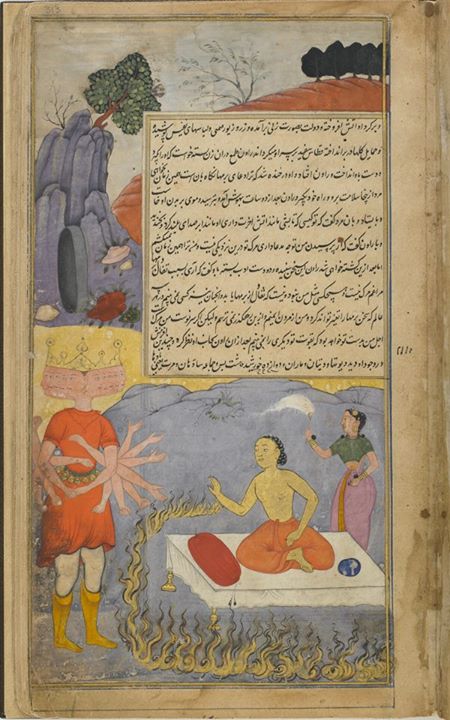 Ravana converses with MAHAJAMBUNADA, who is surrounded by a ring of fire and attended by Laksmi

The Freer Ramayana, an illustrated manuscript of the great Hindu epic painted for a Mughal nobleman is in the possession of the Smithsonian Institution.


Extract from:
The Ramayana (Uttara Kandam) by Manmathanath Dutt

"Having conferred this boon upon Ravana the grand-father, sprung from lotus, speedily returned to the region of Brahman. And having obtained the boon Ravana too came back. After a few days that Rakshasa Ravana, the dread of all people, arrived at the banks of the western Ocean with his councillors. And on the island a person was seen bright as fire under the name of MAHAJAMBUNADA, seated there alone. He had a dreadful figure and was like unto the fire at dissolution. And beholding that highly powerful person amongst men like unto the chief of gods amongst the celestials, the moon amongst the planets, the lion amongst the Sarabhas, the Airavata amongst the elephants, the Meru amongst the mountaIns, and the Parijata amongst the trees, the ten-necked demon said "Give me battle." There at his eyes became agitated like unto planets and from the clashing of his teeth. A fabulous animal supposed to have eight legs."

Extract from:
Images of Thought: Painting in Islamic India 1550-1750 by Gregory Minissale

"...The Mughals also painted Sita undergoing fire by ordeal to proveher virtue and there is also a painting of MAHAJAMBUNADA surrounded by aring of fire. It may also be noted here that the Jesuit Father Monserrate records that the Jesuit debate with the mullahs at Akbar’s court reached such an impasse on one occasion, and that a trial by fire was discussed as a way to resolve the conflict between the “disputing physicians.” Although this was notallowed to happen, knowledge of mythic archetypes is indicated here, as well as the persistence of theological traditions and beliefs. What is being painted then,in a presumably simple illustration of Seyavash and the trial of fire, or for that matter any of the examples given here, is an archetype that may exist as asemantic chain: white, spirit, sun, fire, death, apocalyptic cleansing, rebirth, andcivilisation. Fire reflects the power of myth because of what is possible to dowith it: as an original solar flame it can be kept alive as a something sacred in generations and in the concept of the farr-i izadi; it has both a destructive and cleansing force, it destroys and yet brings civilisation (the cooked, the sacrificial offering) it signifies illumination in tales of the prophet Musa and the burning bush and is associated with ancient light imagery by the Mughals. Cooperative with the darkness of the cave which signifies esoteric wisdom, the fire represents an advanced form of revealed or exoteric knowledge which can lightup the darkness but can also burn, hence the initiation ceremonies that surround it such as cooking, emphasising the domestic, civilising rituals surrounding fire."

Could someone translate the Persian script?