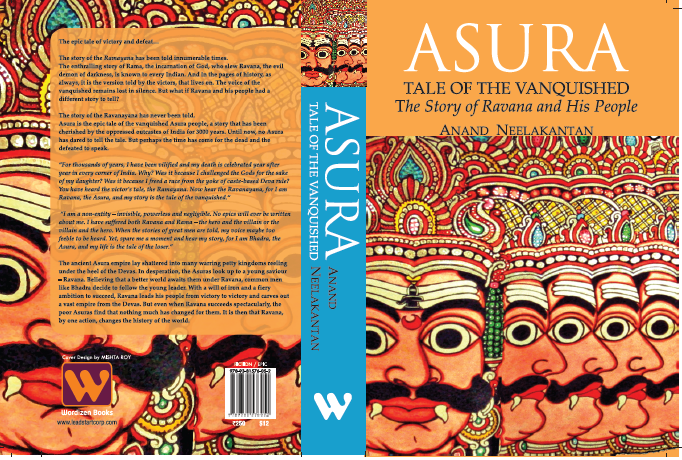 Summary:
In this bestseller, Neelakantan tries to break the age old tradition where history is always narrated by the victors. Asura: Tale Of The Vanquished dares to narrate the tale of the Asura people. Blending mythology, religion and history, the book narrates the tale from Ravana and Bhadra's perspective.

The book talks about how the Asura community is more liberal than the orthodox Deva clan, which was highly biased. It also attacks the evil practices of the Brahmin caste. From the tale of Mahabali, Vamana, and Sita’s Agni-Pareeksha, to Jatayu’s meeting with Ravana, the author reveals the many human emotions behind these stories and logically presents a new perspective for the readers.

How wrong was Ravana to challenge the mighty gods for his daughter's sake? Was he evil for deciding to lead life in his own terms? Was he wrong for freeing the people from the caste-cased Deva reign? The author takes the readers on an enthralling journey and poses many such complex questions.

Bhadra is a creative character who gives voice to the common man, who is lost amidst the villains and heroes. The author has been appreciated for his eye for detail, which gives life to his work. The right blend of good language and interesting twists keeps the book engaging.

About the author:
Anand Neelakantan is a talented narrator from India. Asura: The Tale of the Vanquished is Neelakantan’s debut novel. He is currently working on another mythological tale that details the Kaurava’s version of the Mahabharata. He has a few satirical short stories to his credit.

Born in Kerala, Anand has been fascinated with mythology since his childhood. He is married to Aparna, and has two children, Abhinav and Ananya. Besides writing, Anand enjoys oil painting, reading, and drawing cartoons.

Thanks to Mallika Trivedi Gautam for this book suggestion.

this, unfortunately, is neither a rare book nor a book on true history or mythology.

As the above description clearly states...this is a 'new book' and that its also a 'tale'. Mythology by its very nature can have many versions... just as history has its versions.

Ravana was Brahmin who is also called chaturvedi for his deep knowledge in Chaturveda.. He was addressed as Aryaputra in Ramayana... His father was also a bharmin rishi...

I have read it. Its an interesting take on the established story of ramayana. Totally thru the view point of 'ravana'. I wud give it 7 out of 10.

@ admin - true, but this is the first time i'm seeing posts about new books on your page. i clicked on the link expecting a historic or mythological record.

Thank you for pointing to this book. One always enjoys new perspectives on our classics. This promises to be one.

Raghav Sharman: Of course rare books and prints constitute most of RBSI's posts... but we do post new books sometimes when it enables us to enhance our understanding of the theme in context... such as Ravana today.

All these are due to ignorance in sanskrit

We live in Kali Yuga, so no wonder demons are glorified, while Bhagavan is condemned.

Thank you, RBSI, for accepting / respecting my suggestion. Raghav: this is a "what-if" book. What if these were the facts, and not the ones we've heard for years? What if this was between-the-lines? Its just a hint of the possibility. You know the Brits called 1857 the Sepoy Mutiny, while the Indians called it the Firt War of Independence? Now imagine this, what if Brit rule had continue for another 500 years? The "first war of independence" would have been forgotten and only the "mutiny" would have remained. So if someone brought out a book with the "war of independence" version after 700 years of Brit rule, a lot of people would have scoffed at it, amd dismissed it as fanciful fiction. As RBSI says, mythology by its very nature can have many versions. Kamban's was one. Valmiki brought in another. Anand Neelakantan brings you a third. For years, I've thought about how the Mahabharat seemed written by the victors of the war, victors who were disentitled to begin with, and then used eery means - fair & unfair - at their disposal to get what they wanted. So glad to hear Neelakantan is actually working on that book.n

Dominick, demons & bhagwan are quite subjective, as we should know from history & current affairs alike.

Trying to read through it

Lathashree Kolla I have read the book a very interesting take on the ramayana, a very plausible plot that could have really taken place, unlike real ramayana the author has tried to show how people might have really been in those circumstances

It is not surprising coming from a Keralite ! I Always wondered that while Onam celebrates the visit of King Mahabali to the state of Kerala every year, we celebrate the death of the same king as Balipadyami during Deepavali. Each his own !

According to an incident in Ramayana, Rama himself praises Ravana as a 'Mahabrahmana' and sends Lakshmana to obtain the auspicious hour to attack Lanka from Ravana!

Naraka Chaturdashi is a day of mourning in parts of NE india....

Has any one read history of ancient india from 7300 bc to 4250 bc part1 and 2nd book history of ancient india from 4250 bc to 630 ad , sounded very interesting. The author claims the dates have been considered after calculating the positon of the stars and constellation mentioned in our vedas and puranas, but the dates given in these books are very different from the dates were are aware of from history textbooks, so I was a little confused about its autheticity. Apart form the dates the book tries to present indian history as described by the vedas puranas and Ithihas, removing the exsaggeration involved in mythologyand presenting the events as pure historical events has any one read these books what is your take?

The book is authored by JP mittal

word mythology is wrong usage of terminology. Its generally used by westerners to refer to dead or 'not True' civilizations. Unfortunately most Indians have no sophisticated understanding of Indian traditions or the english language.

This book seems to be oen more in a long line of self styled marxist and/or anglicized-indians who have no knowledge of the issues that are being dealt with in the ancient books - because they are unable to ead and understand the original texts. As earlier pointed out, Ravana was a descendent of rishi Pulastya. http://en.wikipedia.org/wiki/Pulastya The Devas and Asuras are also 'cousins' in a sense. So the presuppositions of the book itself is wrong !

Would love to read this book.

Sudhee Sn: What then is the appropriate word for mythology?

@RBSI - there is no appropriate word in English. That is the point. Ramayana and Mahabharata are called 'itihaasa' , Puranas are Puranas. Even in English, just use the term Purana or Itihaasa-Purana. This is true even for other important conceptual words like atma , karma, dharma, parabrahma etc. These words have very different meanings than their usual-used-english-equivalents. Hope this helps.

Puranas are written long long after an event. Ithihasas are written when the event immediately takes place. Valmiki and Veda Vyasa were present during Ramayana and Mahabharata period respectively. Btw, isnt 'mythak' a sanskrit word?

"Mithya" :)) Most Indians dont have an understanding of the deeper underlying meanings of english words. They dont understand how the word 'God' in english is so different from 'paramatma' or how using different cases like 'God'/'god' makes a ideological point. To add to the confusion, anglicized indians are unable to even talk or read in their own mother tongue and rely on foreign authors. So what we have in India is a completely confused anglicized elite, who think they are superior to the native indian who does not know english. Anglicized indians do not even know how to use a word like 'ethnic' - and refer to their own traditional clothing as "exotic" and "ethnic" i.e they are referring to their own culture using a foreign perspectve terminology !. Stupidity and confusion of the anglicized indian is boundless.

Thank you Sudhee Sn! I myself am undoubtedly guilty of many of your charges. But I do agree with your honest observations. Especially the concept of inappropriate translations struck a chord in me. Thank you!