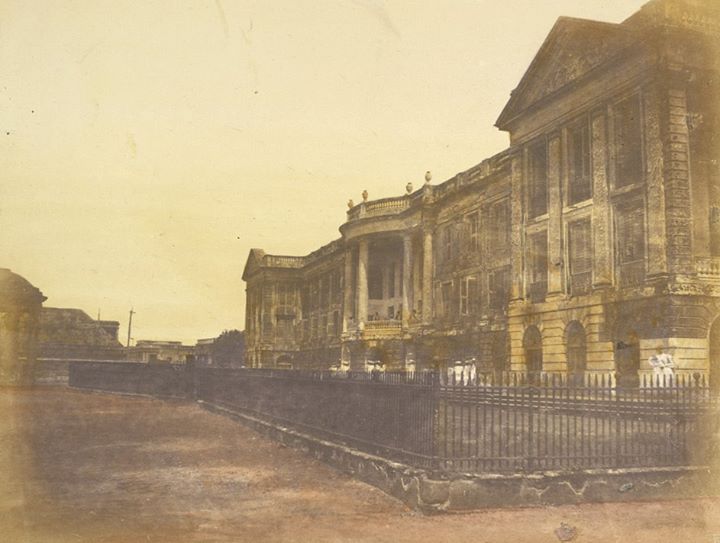 Digital Rare Book:
Fort St. George, Madras - A short history of our first possession in India
By Mrs. Frank Penny
With pen and ink sketches by the author, and other illustrations.
Published by Swan Sonnenschein in London - 1900

Image:
Photograph of the interior of Fort St George, at Madras, taken by Frederick Fiebig in c.1851. This view shows Fort Square in the foreground and the Secretariat, dating from 1694, in the distance. The top of the flagstaff, reputedly the tallest in India, is visible behind, and the monument to Lord Cornwallis beneath a rotunda stands in front. The fort was erected in the early 1640s by the British East India Company as a trading post and base for European residents, and the city of Madras grew up outside its walls. It was considerably expanded and its fortifications strengthened during the 17th and 18th centuries and many historic buildings were erected within its confines.Little seems to be known about Frederick Fiebig. He was probably born in Germany and became a lithographer (and possibly was also a piano teacher) in Calcutta, publishing a number of prints in the 1840s. In the late 1840s Fiebig turned to photography using the calotype process, producing prints that were often hand-coloured. His photographs includes several hundred views of Calcutta in the early 1850s, one of the earliest detailed studies of a city, a large hand coloured collection of which were bought by the East India Company in 1856, their first major acquisition of photographs. Among the roughly 500 pictures were views of Calcutta, Madras, Sri Lanka, Mauritius and Cape Town.