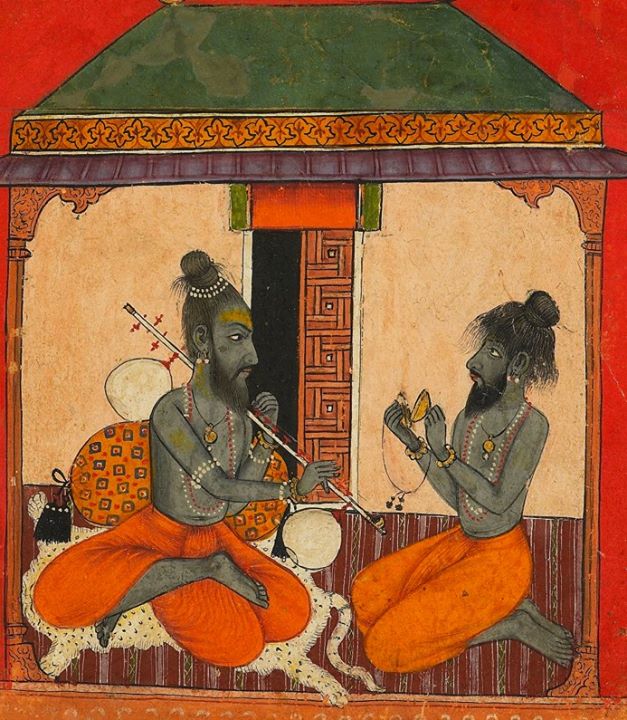 The musical mode Kedar is visualised as two yogis or ascetics making music within a small pavilion. Seated on a leopard skin, a traditional seat of yogis who have mastered the temptations of the sensual world, the vina player improvises a raga, gazing with concentration at his companion who beats the tala or rhythmic cycle with cymbals.

Whether it is hindustani raga "kedar" or carnatic ragam "kedaram" ... both different and here it is kedara. .. I think hindustani

Thank you @Swati Reddy. You star! I have seen this picture many times in the Indian Collection at the Ashmolean Museum in Oxford. They have a great collection. Would love to show you round some day.

Would love to come and see it with you too :-)!

Thanks for posting this great painting. Wondering if it was a common art style in this period to present yogis in dark skin color?

U can all also listen to hamir kalyani ragam.. carnatic system.. equivalent of raga kedar in hindustani

One sits on the leopard skin. The other does not . Also one of the yogis eyes command and the other eyes follows the command ( a gazing expression intently trying to get the next cues ) May be it is the father/son or guru shisya. Because of the guy looks more elder and the other much younger. Also one of them is decorated on the arms and wrist and head with a string of pearls while others do not . Theyounger one sits on bare ground definitely showing the place of a younger yogi when compared to the older which i am no assuming is a master ascetic

This portrait shows the guru sishya tradition of the music - Hermit on the tiger skin is the guru and the other one is his sishya (disciple). Veena seems to be Rudhra Veena, which is a rare type in the Veena class, and there are no much exponents in present. Rudhra veena has a hard tone which makes it to sound masculine, contradicting to the idea that this veena is the divine form of Parvathy or Shakthi made by Lord Shiva itself... http://en.wikipedia.org/wiki/Rudra_veena http://www.youtube.com/watch?v=Fz0DE7ywyiU