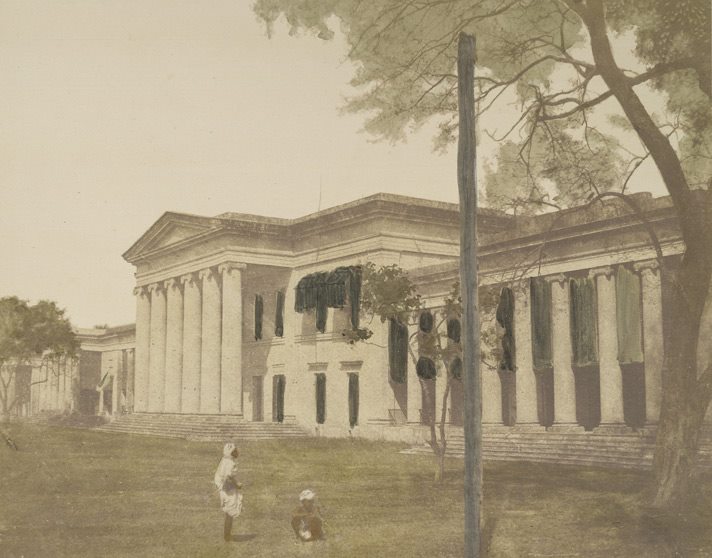 A hand-coloured print of the Hindu College, Calcutta, from the Fiebig Collection: Views of Calcutta and Surrounding Districts, taken by Frederick Fiebig in c.1851-52. This is a general view of the classical main façade of the Hindu College. The college was founded in 1817 and the foundation committee was headed by Raja Ram Mohan Roy, the great Social Reformer. As it was expanding in students and fields, in 1855 the Government renamed it the Presidency College and opened it to all students.

Besides capturing the history and antiquity of buildings, people and ruins of India of the past in watercolours, engravings and lithographs these foreigners were hell bent to record and write about India everything they saw and also equally determined to re-discover our past for the benefit of future generations. There are loads and loads of books which they wrote, and it is a sheer pleasure to read them and know our past. James Prinsep, for example is best known for deciphering the Kharosthi and Brahmi scripts which helped to understand inscriptions on rocks around India as well as pillars in Delhi and Allahabad installed by Ashoka. He was the founder member of Asiatic Society of Bengal whose archives are a goldmine of information and discoveries made in eighteenth and nineteenth centuries. Foremost orientalist of eighteenth century Justice William Jones re-discovered Kalidas and Shakuntala and studied Sanskrit to understand better our scriptures and past history. The list is a very long one, and it is time we appreciate their labour, dedication and flair for knowledge.

why don't any big time loud mouth know it all "schalors"

This is the Madrasa College on Welleseley Square.

It is Sanskrit College.