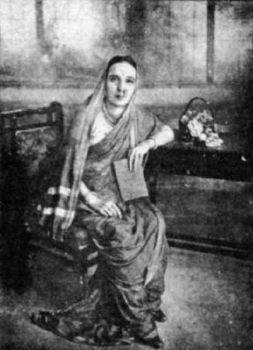 View from the summit
By C.S. Lakshmi

IN 1940, Lady Yashodabai Joshi was urged by her family to write her memoirs. Yashodabai Joshi had been bedridden for six or seven years. She was not in a position to write her memoirs, as her fingers did not move. So she dictated it to her daughter Manik till one month before her death. When she began to dictate she felt that life's journey was like climbing the Himalayas with many obstacles to cross. "But now the summit is near and my legs are heavy with fatigue. So I rest in this sheltered place and calmly survey the long vista of my life," she says in the author's note. When she dictated it she meant it only as a document to be kept within the family. And so it remained after her death in 1948. But in 1965, her daughter Manik decided to publish it under the title Amchi Jeevan Pravas. And in 2003, Manik's son V.K. Bhide decided to publish it under the title - A Marathi Saga.

Yashodabai's memoirs cover a long span of life from 1868 to 1948. Her narration covers so many important areas of these years touching upon caste, marriage, women's education, national politics and family history that is intertwined with all this. The photograph on the cover is one of assertion and symbolic of what Yashodabai stood for all her life. The photograph, taken probably in a studio, shows her seated on a chair wearing a traditional Maharashtrian nav-vari, with one hand placed firmly on her lap and the elbow of the other hand resting on a table. Held in that hand, facing the camera directly is a book. In a way, her narration is about how that book came to be in her hand and how she and her husband Sir Moropant Joshi viewed education for women as one of the most important reforms.

The memoirs begin with her childhood in Satara and her marriage at the age of six to a boy of 13. Yashodabai was born into a family of Chitpavan Brahmins but from a very young age begins to question the caste system. The maid Baija took her to her own house to play when told to do so. She always placed her on a blanket and gave her some toys to play with. Then would come the delicious smell of bhakris, rotis made of millet, being cooked by Baija for her meal. Yashoda would ask her for one but Baija would always tell her, "My dear Balutai, Brahmins must not eat anything cooked by the lower castes."

How can I get the book to read? Any possible way?

One of the best books from perspectives of Indian women (especially Marathi women) in the late 1880s till 1920s. The most poignant is the line 'it is a curse to be born a woman'. A must read for all women to understand how lucky they are. Thanks to all the reformers like Sir Moropant and Lady Yashodabai Joshi