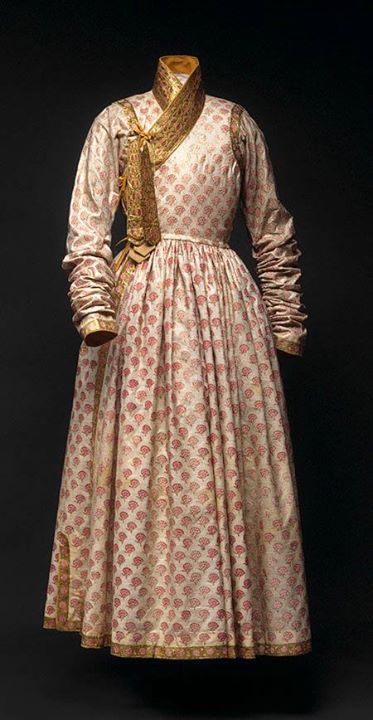 The early Mughal rulers Akbar and Jahangir were interested in fashion stuffs, carpets, and ornamental textiles. Both emperors had a penchant for inventing new names for garments and other clothing. Akbar is recorded as having ordered a new coat or dress with a round skirt to be tied on the right side. This jama may be a later version of the Akbari garment. Its lengthy sleeves would have been gathered up on the arm when the dress was worn. In a painting of Shah Jahan, he is seen to be wearing a similar garment tied with lappets on the right. He is also dressed in tight-fitting trousers, a colorful sash holding a dagger, and a bejeweled turban. Grandees of the realm wore similar clothing but dressed according to their rank. Sometimes individual nobles were given robes of honor by the emperor as a mark of distinction.

I need to get me one of those!

what did royalty (rajput and otherwise)wear before the jama got to india?

More likely that that textile was made in in the north rather than in the Deccan.

5 yards of cloth draped to ones own liking. The dhoti definitely started somewhere creatively