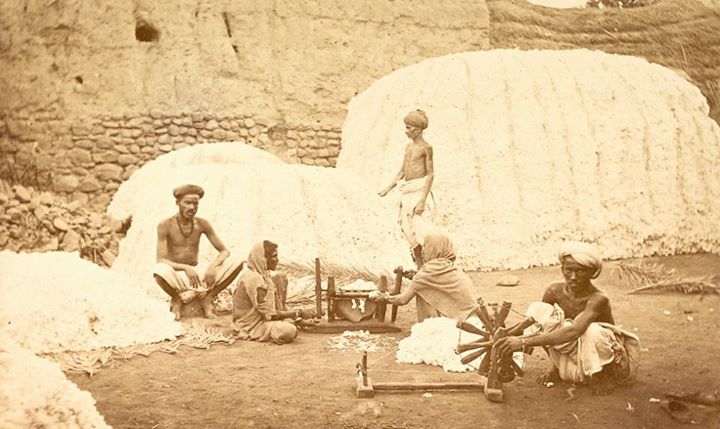 Cotton stacks and 'churka' or cotton gin in operation, Berar - 1866

Photograph of cotton stacks and a 'charka' or cotton gin in operation at Berar in India, taken by an unknown photographer in 1866, from the Archaeological Survey of Indian Collections. After photography was introduced into India in the 1840s it rapidly grew in popularity, particularly as a means to record the vast diversity of people and their dress, manners, trades, customs and religions. The first official attempt to create a comprehensive record of Indian types was the 'The People of India'; an ethnographical survey edited by John Forbes Watson and John William Kaye, and published in eight volumes from 1868 to1875. This photograph shows a group of workers posed among piles of cotton. In the middleground two women operate a small charka or gin, while in the foreground a man is posed with a spinning wheel. In the exhibition catalogue of the Vienna exhibition of 1873 Watson describes of one of these machines, "[the charka] consists of two rollers, either one of iron and one of wood, or both of wood, revolving in opposite directions. The fibre is drawn through between the rollers, the seed, which is too bulky to pass through, falling on the other side. The machine is very simple, and seldom gets out of order, and the principle on which it works is the foundation of most of the cotton gins made from time to time in Europe...The native gins do their work fairly enough, but much seed is sometimes found in the cotton thus cleaned".

Berar (now known by its correct name Vidarbha, a region in the western state of Maharashtra) caught the eyes of the Britishers even while it was a part of the Hyderabad Nizam's domain. The four (now five) districts of western Vidarbha are blessed with black cotton soil that gives a rich yield, provided it is irrigated properly and adequately. Realising the potential of this area, the British first extended the GIP railway's Bombay-Bhusawal line up to Nagpur. Then they encouraged Gujarati and Marwadee tradesmen from other parts of India to come and settle in various small towns of Vidarbha along this railway line and act as cotton collecting agents for the British mills in the UK. Some of these agents also established large ginning factories in various towns. Farmers who grew cotton in their fields first sold it to nearby middlemen (known as adatya/dalal), who brought it in bales to these ginning presses. Thereafter the processed cotton was sent to Bombay by goods trains for onward shipping to England.

I have the scan of an old image dated 1862 showing heaps and heaps of cotton bales lying on the platform of Bombay Railway Terminus, ready for being shipped to England.

Re: ' 1862 ' The date is, as I'm sure you are aware Harshawardhan, quite significant. The manufacturing towns of northern England had relied heavily on imports of cotton from the United States since the dawn of the industrial era. When that source began to dry up as a consequence of the American civil war, British entrepreneurs, with the encouragement of the colonial authorities, substantially increased their investment into the Indian cotton sector - as an alternative source of supply.

You are right, Julian Craig.

I forgot to mention the other day that the history of cotton production in Berar/Vidarbha has its roots in Vedic era mythology. Here is a very brief summary: There was an ancient sage or Rishi called Gritsamada गृत्समद who was once cursed by his mother for some offence. To get the curse revoked, he was advised to go to a holy place called Kalamb which is about ten miles from the town of Yavatmal (one of the four original districts of Berar -Vidarbha). The patron deity of that village Kalamb is Lord Ganesh (Ganapati) and while worshipping this Deity everyday and waiting for the Lord's mercy, Gritsamada became a farmer and an agricultural expert in due course and it was while thus experimenting he accidentally discovered the uses of the cotton seed and thus he became the father of cotton farming and spinning in India.

This is such an amazing story!! Thank you Harshawardhan Bosham Nimkhedkar!

Sage Gritsamada's story finds a mention in the ancient religious text ''Ganeshapurana''. As to where he went for the penance to get the curse revoked, there are rival claims. Kalamb is one of them. For the allusion to his being the discoverer of cotton, see this Marathi page: http://mr.wikipedia.org/wiki/%E0%A4%B5%E0%A4%BF%E0%A4%A6%E0%A4%B0%E0%A5%8D%E0%A4%AD

There is a slight correction in the story I posted in the morning today. Prof Swanand Gajanan Pund, who is a well known authority on everything connected with Lord Ganesha, has just now informed me that sage Gritsamada BELONGED to Kalamb in Vidarbha - it was his native place. He did indeed go to some other place for the penance. However, his discovery of the uses of cotton was made at Kalamb, if the story is true. There is no proof of that, it's a mythological belief - but it's quite popular. [According to Prof Pund, the story in the Ganesh Puarana of Sage Gritsamada getting cursed and then doing the penance is not to be taken literally, as it is actually an allegory - roopaka - and the ancients have used it to explain some other esoteric point. But of course this forum is not the place to discuss that spiritual aspect of the matter.]