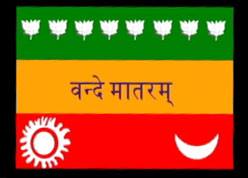 Essay:
A Symbol of Freedom”: The Indian Flag and the Transformations of Nationalism, 1906–2002
By Srirupa Roy

The idea of a flag for India was initially introduced as an imperial rather than a nationalist initiative in the aftermath of the 1857 uprising and the subsequent establishment of direct imperial rule in India. The design for the Star of India flag proposed in 1863 was in keeping with similar flag designs adopted in other colonies such as Canada and Australia, which combined signs of imperial authority (the Union Jack, the royal crown) with a sign specific to the country in question (in the Indian context this was a star). How and why did the image of a star convey Indianness? This
question about the national significance of heraldic symbols, or the fact that the meaning of a flag had to be specified in nationally specific terms and had to resonate with a local population, was also one that was first raised within imperial circles at the turn of the twentieth century. During the initial stages, the discussion remained confined to this official domain. Indian nationalists at the time turned instead to
(Hindu) religious iconography in the search for appropriate representations of the nation. However, the question of a heraldic symbol for the nation soon exercised the nationalist imagination as well, possibly because of the limited appeal of the predominantly Hindu symbols and their consequent inability to mobilize across religious lines. As Arundhati Virmani has observed, this also illustrates the dialogic character of anticolonial nationalism or the fact that the encounter between colonialism and nationalism was frequently staged around a common set of symbols and discourses.

Excellent! Thank you for linking to this article.