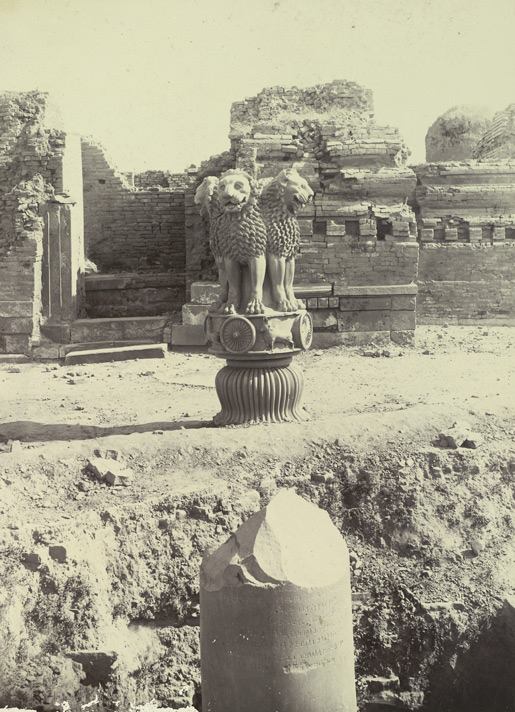 Photograph of the Lion Capital at Sarnath, Uttar Pradesh, from the Kitchener of Khartoum Collection: 'Views of Benares. Presented by the Maharaja of Benares' by Madho Prasad, c.1905 . Sarnath is the sacred place where the Buddha preached his first sermon known as the Wheel of Law, the Dharmachakra, in the sixth century BC. The Lion capital comes from a column at Sarnath in Uttar Pradesh, built by Ashoka, the Mauryan king who flourished in the third century BC. According to tradition, the pillars were raised at various points on the route of a pilgrimage that he undertook in the twentieth year of his reign. The capital, which became the national emblem of India in 1950, is in a museum in Sarnath. The Lion capital is a polished sandstone carving of four lions atop an abacus (the slab forming the top of a column). The lions are facing in four directions and on the abacus are eight images. Immediately below each lion is a dharmachakra, or wheel, with twenty-four spokes. This wheel has been incorporated into the national flag of India. Between the wheels are four animals – a lion, a horse, an elephant and a bull. Falling from the abacus is an upturned, bell-shaped lotus flower.

Where is the Sarnath Lion now? National Museum, Delhi?

It's in the Sarnath Museum. Wow! fantastic photo.

Thanks ! Admin really wonderful that you made really scholarly search

Another picture of the site with the Sarnath lion lying sideways was taken on the same day or a couple of days before this. It was released as a postcard circa 1908. Rare postcard. Fortunate to find one in an antiquarian shop in vienna. Now in my collection, in India...

Correction. The Asoka Wheel on Indian Flag is from the Sun Temple of Konarak. Very minute engraving of the traditional dances on the spoke. You need hand lens to see what i say. I am a Malaysian-views independent/non-emotional.

the chakra is a universal symbol because of the circle being without begining and without end, it's pretty Jungian...

Thanks, Rare Book Society and Hardev Singh Khosa! Good to get properly informed on our national emblem.

This is more or less a copy of persian symbols of royalty. The lion isn't native to india and has never been present in eastern india. The Mauryans had interactions with the Persians, who were essentially the superpower of eurasia at the time. So they adapted their symbols for their own burgeoning empire..