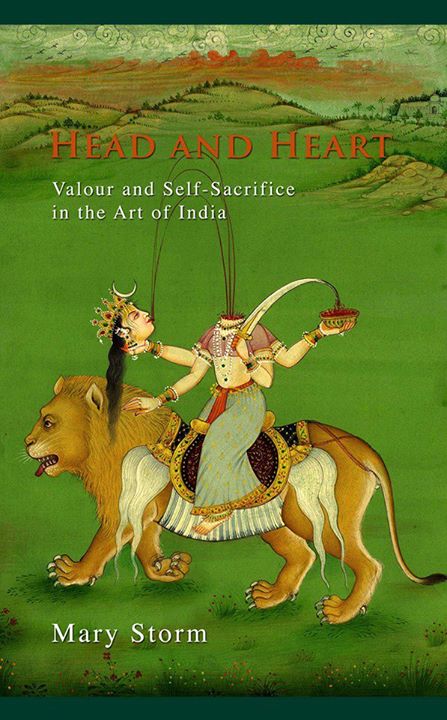 New Book:
Head and Heart : Valour and Self Sacrifice in the Art of India
By Mary Storm
Published by Routledge India - July 2013

An extensive study of self sacrificial images in Indian art, this book examines concepts such as head offering, human sacrifice, blood, suicide, valour, self immolation and self giving in the context of religion and politics to explore why these images were produced and how they became paradigms of heroism.

Buy this book at Amazon:

Interview with the author:

SIT Academic Director Mary Storm, PhD, has authored a new book, Head and Heart: Valour and Self-Sacrifice in the Art of India, to be published by Routledge this summer in the US, the UK, and India simultaneously. We recently talked with Dr. Storm about the book and her ongoing research.

SIT Study Abroad: Tell us about the book. What are its central ideas and arguments?

Mary Storm: The book is a study of the paradigm shift in Indian art from logos to icon in the expression of sacrifice and the development of social altruism. The text explores how aniconic, but precisely articulated, Vedic sacrifice, controlled by Brahmin elites, developed into the Puranic tradition of highly visualized loose narratives accessible to “Everyman.” Additionally, it questions how Indian society created visual models of self-sacrifice necessary for a hierarchical but harmonious society. When sacrifice was visualized and was no longer controllable by the literate Brahmin elites, it became a tool for manipulating transference of power within the caste system which allowed outliers (low castes or women) to access and claim heroic behavior.

Amazing find. Thanks for sharing.

Such a sad reflection on the nature of religion....I'm sure an interesting book.

It is a picture of goddess Chhinnamasta!! For details- http://en.m.wikipedia.org/wiki/Chhinnamasta

one of the dashamahAvidyA = the 10 great wisdoms personified as goddesses

This must be another attempt to find uncivilized and barbaric versions of some ancient art...which is incomprehensible to us and most difficult to be understood by the modern west....again something that if cannot be understood is barbaric.. must be an interesting read...

Tarun Dhingra: Not really. Please read the interview with the author... http://bit.ly/142pEUc

Cant open the link... Please note I wd love to read the book...

This is what's known in Bengal as "Chinna-Masta" [meaning, Severed-Head]. However, admittedly I’ve never seen "Chinna-Masta" riding a Lion. Traditionally, in Bengal at least, "Chinna-Masta" is seen standing on Rati & Kama and appears entirely different and is bi-handed. Who is "Chinna-Masta"? She’s one of the Ten Mahavidya including Kali, Vairavi, Matangi, Kamala etc. There’re different versions to their origin. However, the most popular one is connected to the Puranic legend wherein Shiva had advised his wife Sati against going to Daksha’s Yajna because they were not invited to it essentially because Shiva’s ‘bohemian’ or unconventional lifestyle besides having been disrespectful once in the past (to his father-in-law Daksha). Yet Sati had gone uninvited. After all she was daughter of Daksha. On spotting Sati, the father started to deprecate Shiva -- speaking all kinds of ill about his son-in-law -- right on her face and in the presence of all. Unable to bear such ignominy and insult Sati gave up her life during the Yajna. Much happened afterwards that eventually resulted in revival of the beheaded Daksha with a goat’s head, according to Bhagvat. However, the Puranic legend of Ten Mahavidya took place when Shiva had denied permission to Sati to go to Daksha’s Yajna. On being thus negated, Sati or Bhagavati first appeared as Kali to scare or overawe Shiva to elicit his permission. When that failed then Bhagavati [Sati] appeared in ten different forms – each one placed in all of the ten directions – to encircle or ‘gherao’ Shiva preventing him from any movement. These ten forms or appearances are known as Ten Mahavidya. One of these is "Chinna-Masta". To shock and awe Shiva was no mean affair. Hence, all the ten forms (appearances) were indeed scary affair! [This Puranic Legend is not available in Amish’s very well written (popular too!) Shiva triology!] It’s likely that Mary Storm has not dealt her subject(s) in the above manner. Yet, the preview (provided) seems to me abundantly educative and interesting as well. Very little seemed to have been done on the subject theme of the book.