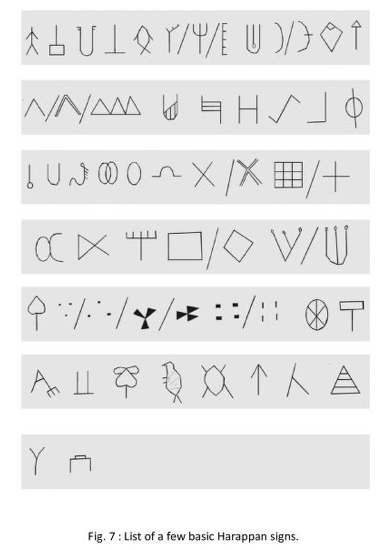 Around 45 odd signs out of the total number of Harappan signs found make up almost 100 percent of the inscriptions, in some form or other, as said earlier. Out of these 45 signs, around 40 are readily distinguishable. These form an almost exclusive and unique set. The primary signs are seen to have many variants, as in Brahmi. Many of these provide us with quite a vivid picture of their evolution, depending upon the factors of time, place and usefulness. Even minor adjustments in such signs, depending upon these factors, are noteworthy. Many of the signs in this list are the same as or are very similar to the corresponding Brahmi signs. These are similarities that simply cannot arise from mere chance. It is also to be noted that the most frequently used signs in the Brahmi look so similar to the most frequent Harappan symbols. The Harappan script transformed naturally into the Brahmi, depending upon the factors channelizing evolution of scripts.

This is simply marvelous. Thank you!!!

Manas its new interpretation of the Harppan Language or Signs..

I don't think so.

Shall I try the correspondence between Harappan and Archaic Chinese scripts.

very interesting..great as a wall painting too and then we cld stare at it and maybe eureka!