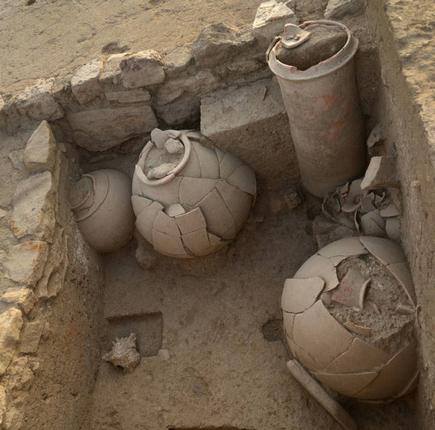 January 2, 2011 was a golden day in the second season of excavation at Khirsara village, 85 km from Bhuj town, Gujarat. Nearly 30 trenches had been dug that season, each 10 metres by 10 metres. One of them yielded two miniature pots, which a labourer rushed to S. Nandakumar, a site supervisor in his 20s. He took them to Jitendra Nath, Superintending Archaeologist, Excavation Branch, Vadodara, Archaeological Survey of India (ASI). “They are gold beads,” announced Mr. Jitendra Nath after examining them. One of the pots contained 26 disc-shaped beads, micro beads and a ring, all made in gold, and steatite beads.

“Exciting results” from four seasons of excavation with 120 trenches dug at Khirsara from December 2009 have established Khirsara as “a major industrial hub” that belonged to the mature Harappan period. It overlooks the Khari river and flourished for 400 years from circa 2600 to 2200 BCE.

Carbon dating at the Birbal Sahni Institute of Paleobotany, Lucknow, for the botanical remains collected from Khirsara’s trenches falls in the range of 2565 to 2235 BCE.

Khirsara has everything to be called a mature Harappan site: systematic town planning, a citadel complex where the ruling elite lived, a factory complex, habitation annexes, a warehouse, drainage system, and massive fortification walls. All the structures were built of sandstone blocks set in mud mortar. Excavations have yielded 11 bar, circular and square seals, standardised bricks in the ratio of 1:2:4 and a staggering variety of pottery including reserve slip ware. While the bar seals have only the Harappan script, others have carvings of unicorn and hump-less bulls with the Harappan signs.

This article is courtesy of Sumedha Verma Ojha's page.

Just curious, that part of Kutch is extremely dry; did they find anything that reflected people living in desert type environment?

Hemendra Modi: At the time this civilisation flourished it was fertile and well watered area part of the Sindhu-Saraswati riverine system.( Much has been written recently about the lost Saraswati River, one book I could recommend would be 'The lost river' by Michael Danino). In actual fact, a number of academics are veering around to the view that it was critical changes in the river systems which led to the downfall of this civilisation.