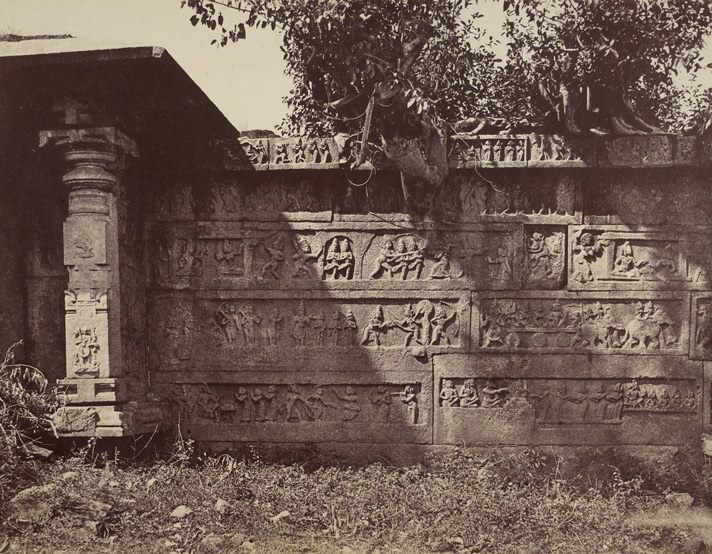 Photograph showing a processional frieze carved in relief on a wall of the Hazara Rama (Ramchandra) Temple, at Vijayanagara in Karnataka, taken by Andrew Charles Brisbane Neill in c.1856, from 'Architecture in Dharwar and Mysore'. Vijayanagara, the City of Victory, was the seat of a powerful Hindu kingdom in Southern India from 1336 to 1565. The kingdom was founded by two brothers, Harihara and Bukka, formerly chieftains with the Delhi Sultanate. Vijayanagara flourished as a prosperous centre of Hindu art, culture and architecture, until the Battle of Talikota in 1565 when it was defeated by the armies of a coalition of neighbouring Muslim kingdoms, its rivals for supremacy in the Deccan. The ruins of this vast royal city on the bank of the Tungabhadra River lie surrounded by granite hills. The site is also known as Hampi, together with a small local village nearby. In its heyday, with its strategic setting which was both spectacular and with good natural defences, the city was an influential centre for trade, especially in Arab horses and spices, and welcomed foreign travellers who left accounts of its grandeur. Its plan consisted of a number of zones, the sacred, the urban and the royal. The small Ramachandra temple is located at the heart of the royal centre, within a rectangular enclosure whose walls depict processions of elephants, horses, armies and dancers during the Mahanavami festival, the most important annual event in Vijayanagara. Inscriptions date it to the reign of Krishnadevaraya (ruled 1509-29), the most celebrated sovereign of the kingdom. The worship of Rama, the hero of the Hindu epic Ramayana, was of personal importance to the Vijayanagara rulers.