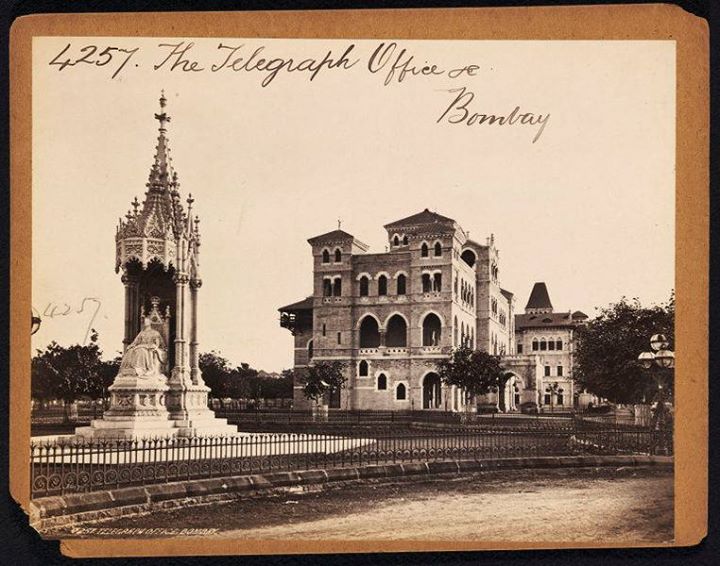 An albumen print mounted on brown card by Francis Frith & Co., part of the Universal Series of topographical photographs.

I rem the the canopy( minus statue) outside the Raymond Singhania's building on Warden Road in Mumbai for many many years!

Sad that today marks the end of the Indian telegraph service.

... An interesting, if slightly eccentric, choice of architectural style - the medieval Italianate Gothic ! British architects on the sub-continent during the 19th century were certainly innovative...

Some trivia: The marble statue in front is that of Queen Victoria. It was presented by Gaikwads of Baroda. The figure was 8 ½ ft high and the canopy was about 45 ft high! It was sculpted from about 350 tons of marble by on Matthew Noble, of London. It was unveiled in 1872. Thus the photo cannot be of 1850s but sometime later In 1965, the statue was moved to Dr. Bhau Daji Lad Museum (formerly the Victoria and Albert Museum)and the marble canopy was purchased by Raymond’s Singhania. It stands empty in his estate at Juhu. The Maharashtra government passed an act in 1968 by name ‘Bombay Queen Victoria Site (and adjoining land utilization for construction of Satellite Communication Exchanges of the overseas communication service) Act 1968’. Overseas Communication Services (OCS) tower was built on the said site which is now Tata Communications! Incidentally, CTO stopped telegrams from today!:-)

Re: " Thus the photo cannot be of 1850s but sometime later" ... ... Gillian Tindall notes in her ' City of Gold : The Biography of Bombay " (1980 p. 179) that: " In 1864-65 the first telegraph cable [ between Europe and Bombay ] was laid via the Persian Gulf ; it was extremely expensive to use, which led to early messages being brief to the point of obscurity... there is a tradition (but it sounds almost too neat to be true) that the first news sent via the cable was that of the abrupt ending of the American Civil War in April 1864." The laying of the trans-continental cable does not - of course - preclude the sending and receiving of telegraphs at Bombay from other locations within India prior to 1864 - but whether they were dispatched from this particular building or not is a matter for further investigation !

The canopy must have been moved to Singhania's Juhu estate in recent years. It was standing at the Raymond showroom on Bhulabhai Desai/Warden road until early 1990s. And the Central Telegraph Office building. That was completed by architect, W. Paris in 1874. Same architect who made the adjacent building, GPO in 1872. (Quoting Sharda Dwivedi/Rahul Mehrotra - Bombay, the cities within ). Further from the same book - "The uprising of 1857 taught the English the value and importance of the telegraph as a means of quick communication. Thus, by the following year, telegraph stations were established in important towns of the Bombay Presidency and by 1860, 5 main lines were operating from Bombay. In 1866, Bombay was linked by telegraph to Europe via Turkey and a cable route was laid from Bombay via Aden to Suez. In 1870, the Bombay-london service was commenced with the laying of an underwater cable." The first overland communication took place in 1787, when an agent was appointed in Egypt for exchange of despatches between England and India. In 1794, the GPO of Bombay Presidency was formally established. By 1798, a monthly communication via the Persian Gulf, was setup as a process. Dak-runners between Bombay & Poona started in 1825. Indian Postal Act is from 1856. First Money Order from 1866 & first PPC ( Picture Post Card) from 1896. The Overland route to India is shown in a beautiful & popular Tallis map.

Julian, the ships that laid the cables between Europe and Bombay were Great Eastern and Chiltern (captained by Anderson) - the same that relaid the cables transatlantic. The first cable, through which Queen Victoria then sent a telegram of congratulation to President Buchanan had to be changed. The British-Indian Submarine Telegraph Co. was formed to provide the final link in the Indo - European submarine telegraph cable by linking Bombay to Aden and then Suez. Great Eastern sailed for Portland Harbour on the 23rd October to finish coaling, then sailed from there on the 6th January 1869. On the same day Chiltern left Greenwich, both ships bound for Bombay via the Cape of Good Hope. Great Eastern arrived at Bombay on 27 Jan 1870. Laying commenced on the 14th February 1870.

Lithographs of the Transatlantic cable laying by Great Eastern...http://thecanadasite.com/antiques/memorab2_gteastern2.html

The building above was inaugurated in 1870 and was the General Post Office till the early 20th century. After the VT building came up in 1909, this became the Central Telegraph Office.

Thank you for the information, Arindam.... ' The Great Eastern ', no less ! So it would seem that Bombay has a direct connection (pardon the pun) with the great Brunel - however tenuous a connection that might be...

Hehe...Bombay had no choice, Julian as it was the largest paddle wheeler afloat that could carry tonnes of cable via Cape of Good Hope. But the technological advances of Brunel probably haunted Dickens (Signal Man). After it's failure as passenger liner, the owner's were bankrupt. Gooch and Barber siezed the oppurtunity and bought GE, which underwent repair and reshaping. They then chartered GE for cable laying. It was principally used for cable laying to many other parts of the world.