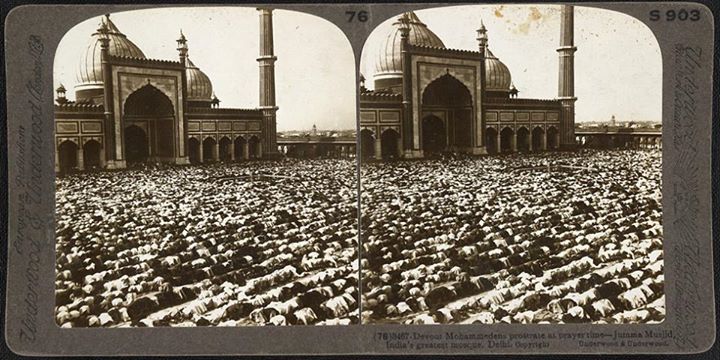 Stereoscopic photograph of Muslims at prayer in the Jami Masjid at Delhi, taken by James Ricalton in c.1903, from The Underwood Travel Library: Stereoscopic Views of India.

The Jami Masjid was the principal mosque of Shah Jahan's new capital city Shahjahanabad. The largest mosque in India, it was the last great architectural venture of Emperor Shah Jahan (r.1628-58), the most prolific builder of the Mughal dynasty. It took six years to build and functioned as a congregational mosque which could hold 250,000 people. Approached via broad flights of steps its three gateways lead into a huge courtyard with a central tank for ritual ablutions. The mosque is built of red sandstone with white marble. The main building is topped by three onion-shaped domes of white marble striated with thin strips of black marble, and is flanked by two minarets. Ricalton took this photograph on the first day of Ramadan. It is one of a series of 100 stereoscopic photographs (or 'stereographs'), designed to be viewed through a special binocular viewer (stereoscope), producing a three dimensional effect. This particular series has an accompanying book, also by James Ricalton, entitled India through the Stereoscope. A journey through Hindustan (nd, c.1903). It contains a more detailed description of each scene, together with maps showing the precise location and angle of view of each photograph. This volume is located at BL shlefmark Photo 182.

Stereoscopic cameras, those with two lenses and the ability to take two photographs at the same time, were introduced in the mid 19th century and revolutionised photography, particularly after stereographs were shown at the Great Exhibition of 1851. This signalled the beginning of a huge trade in stereoscopes and images; it is estimated that by the mid-1850's over a million homes owned a stereoscope viewer, although many fewer would have actually owned a stereoscopic camera itself.