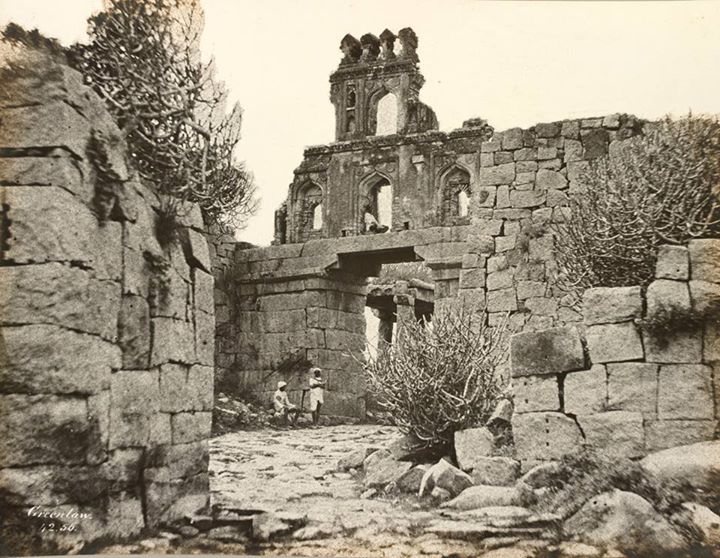 This photograph shows a fortified gateway known as the 'Talarighat Gate', Hampi (Vijayanagara) - 1856
By Alexander Greenlaw

This photograph shows an oblique view of a ruined three storeyed gateway set into fortified walls. The two upper, arched sections have carved surface detail and a parapet. Two assistants are posed near the entrance and another seated in an archway above, presumably to indicate scale and in this case, act to direct the viewer's eye to the photographic subject. In the foreground to either side are further sections of fortified wall overgrown with cactuses. Areas of sky around a cactus plant and within the arches of the gateway have a more grainy texture, indicating where the sky has been whited out by inking in these areas by hand on the negative. Inscription bottom left.

Identified by an inscription as the 'hunter's gate', this gateway is found on the northeast road leading to Talarighat and the Vitthala temple complex. The gateway has a merloned parapet and pointed arches with rosettes in the spandrels. The walls in the foreground suggest a barbican enclosure (which no longer exists), forcing a number of turns in the approach to the gateway.

The Vijayanagara empire ruled southern India from 1336 -1565. As India’s last large state system prior to the British colonial takeover, it has been perceived as the final great era of 'traditional' Hindu India and also as a transitional phase which transformed Indian society from its medieval past towards its modern, colonial era. The empire built its imperial capital, Vijayanagara ('city of victory'), around the ancient religious centre of the Virupaksha temple on the south bank of the Tungabhadra River at Hampi, Bellary District, Northern Karnataka. Three dynasties ruled from Vijayanagara: the Sangama (1336-1485), the Saluva (1485-1505) and the Tuluva (1505-1565). By the year 1500,Vijayanagara was the second most populous city (after Beijing) in the late medieval world. The Vijayanagara rulers fostered developments in intellectual pursuits and the arts, warfare, engineeering and agriculture, and were also great patrons of religion.

The ruins at Hampi represent the largest concentration of Vijayanagara architecture and are listed as a UNESCO World Heritage Site, known as 'the Group of Monuments at Hampi'. Vijayanagara architecture consists of religious, courtly and civic buildings and sculpture and is characterised by a return to a more serene art of the past, taking elements from the Chalukya, Hoysala, Pandya and Chola periods. Granite, the local and durable stone, was used with plaster applied to many sculptures to produce a smooth finish which was then gilded or colourfully painted.

Photographic significance (the photography as subject) –

This photograph is a good example in the series that shows how the sky has been whited out by applying Indian ink to the negative. Grainy textured areas around foliage and in archways have been left untouched in this photograph, suggesting the original tonal range. This somewhat crude method was possible due to the large format of the negatives.

Greenlaw's systematic coverage of the ruins of Vijayanagara at Hampi is significant within the connected histories of colonialism and photography. Taken in 1855-56 when the use of photography in India was gathering momentum as the new tool of documentation, Greenlaw’s series is important as the earliest extensive photography in India of an archaeological site.

While Greenlaw exhibited prints as early as 1856, none are now known to exist from the time the negatives were made, therefore the V&A’s 1910 prints represent the earliest extant photographs.

As architectural photography, the series successfully determines the condition of the monuments at that time. Since then, many of the structures, in particular their superstructures and sculpture, have altered in appearance due to further disintegration, banditry, conservation, tourism and development, and some have disappeared altogether.

Thorough and perceptive as one of the early amateur photographers who introduced the medium in India, Greenlaw was influenced by the picturesque aesthetic style of his era yet his compositions show a lack of artifice and a clarity of viewpoint. John Gollings writes: “ He has established many of the basic descriptive views and given a coherence to the city which is every architectural photographer’s aim. His work is seminal in conception and outstanding in its execution” (Rao 1988, p.18).

Greenlaw worked with large format 16" x 18" negatives which gave good detail to architectural subjects, yet while not unusual for work of this period, they were cumbersome. Despite this and the harsh Indian climate, Greenlaw became technically adept at using the negative-positive calotype process for which paper was impregnated with light sensitive chemicals and then waxed to make the negative translucent for subsequent printing by contact rather than enlargement. The waxed paper process was largely replaced by glass plates in the late 1850s however Greenlaw continued to use it because it suited his particular working conditions and allowed him to process back at base thus enabling a faster coverage of the site.

His cumbersome camera, lens and equipment would have required an ox cart and porters for mobility. Long exposures meant few people were caught as subjects unless posed so it is likely that the figures in many of Greenlaw's photographs were his porters, posed to indicate scale and a sense of place.

19th century paper negatives were only sensitive to blue light making them better suited than modern film to photographing granite and brick against blue sky typically found at Vijayanagara. However, Greenlaw's photographs display some tonal difficulties. The high contrast film necessitated low contrast development with resultant tonal merge problems. Greenlaw somewhat crudely countered this by blocking out areas of sky on the negatives with Indian ink.

Truly a nice pic! Thanks! :D

thanks for sharing those pictures it gives me great joy