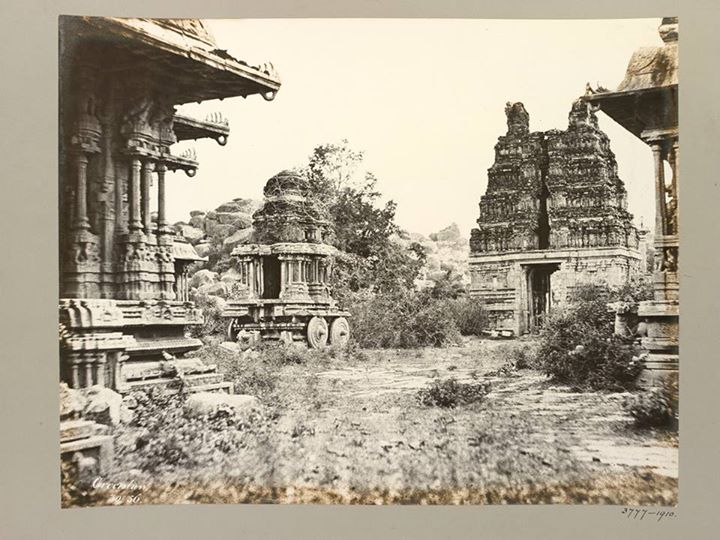 This photograph shows an oblique view of an ornately decorated and domed stone shrine which resembles a chariot with large stone wheels and is set in a courtyard. To the left of the shrine is a section of a temple with elaborate detail and clusters of columns. To the right of the shrine is a towering gateway with elaborately sculpted tiers. Further to the right can be seen a small section of another structure which, to an extent, mirrors the section of temple to the left of the picture. The courtyard is overgrown with vegetation. Rocky hills can be seen in the background. Inscription bottom left.

What a lovely place it must have been then to have maintained it's beauty today through vandal invasions and the march of time !

Tipu Sultan had already ravaged it by then.

Department of Archaeology, Govt. of Karnataka has brought out a coffee table book with photos taken by Greenlaw and photos of the same sites now. This was published when Dr.M.S.Nagaraja Rao was the Director of Archaeology.

back in the 70's you could camp out in these great old ruins, I spent months there thru out those years.

Hampi' ,... <3 I didn't know or find this place while in Hampi, but I spent the first 3 nights out on top of the Big rocks... sleeping on them with just a longe for a bed and one for a sheet. " Full-Moon " boom Shiva.

the ruins run for miles,every year that I'd come back I would find new places, ruins or caves to explore, Bum Bholinath