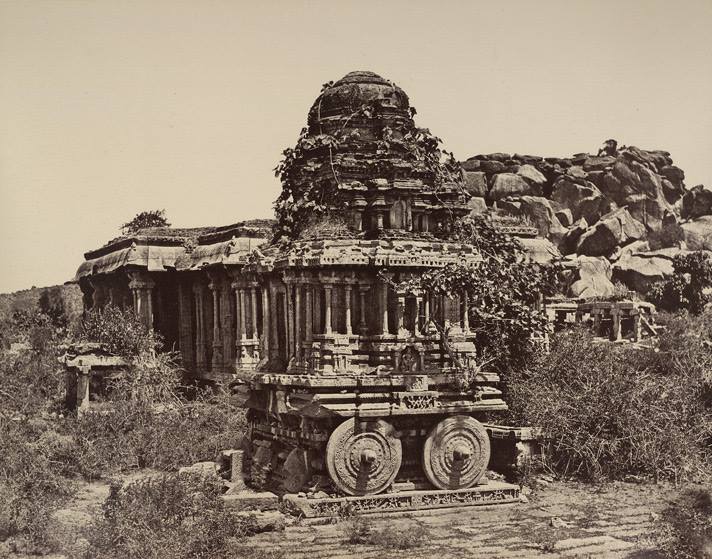 Photograph of the Vitthala Temple at Vijayanagara in Karnataka, taken in about 1856 by Andrew Charles Brisbane Neill. Vijayanagara, the City of Victory, was the seat of a powerful Hindu kingdom in Southern India from 1336 to 1565. The kingdom was founded by two brothers, Harihara and Bukka, formerly chieftains with the Delhi Sultanate. Vijayanagara flourished as a prosperous centre of Hindu art, culture and architecture, until the Battle of Talikota in 1565 when it was defeated by the armies of a coalition of neighbouring Muslim kingdoms, its rivals for supremacy in the Deccan. The ruins of this vast royal city on the bank of the Tungabhadra River lie surrounded by granite hills. The site is also known as Hampi, together with a small local village nearby. The Vitthala temple dedicated to a form of Vishnu is one of the greatest monuments at the site. It is thought to date from the first quarter of the 16th century. It stands within a rectangular courtyard surrounded by cloisters, and the main shrine has a sanctum with a closed ambulatory and is capped with a stepped pyramidal superstructure. An outstanding feature is its glorious open hall or mahamandapa which has dozens of beautifully carved granite pillars. In front of the temple is another celebrated feature, a stone ratha or chariot housing an image of Garuda, the vehicle of Vishnu, created like a shrine in miniature, but with wheels.

The temple has musical columns

Its a real pride that we have such a temple.

what the hell is ASI doing...why these temples are not maintained!!

ASI is doing its best

Do u have old photographs of Kedarnath?

Nitin this is the pride of India/Bharat mind you :)

I think the ASI's main aim is not to take care but make way for whatever the politicians ask them to do. Who keeps a tab on all the wealth recovered after the British left, does anyone know where it is? Or even if its still there?

Our great heritage is neither preserved in good state nor restored to old glory. We owe it to gen next. Our government is run by politicians who are more interested in amassing wealth rather than restoring our invaluable heritage.

Can we as a community TMG DMM do something about it?

If I saw that rolling into town, I'd probably convert.

one more piece of information, jackie chan's film 'myth' was shot in this temple..

nice but i miss the place

This place is still magical !!

shining of the old is still excellent...welcome such photos...thanks your kind and labouring work for that kind of collection for like me facebookies

Look at the cppy right guys...