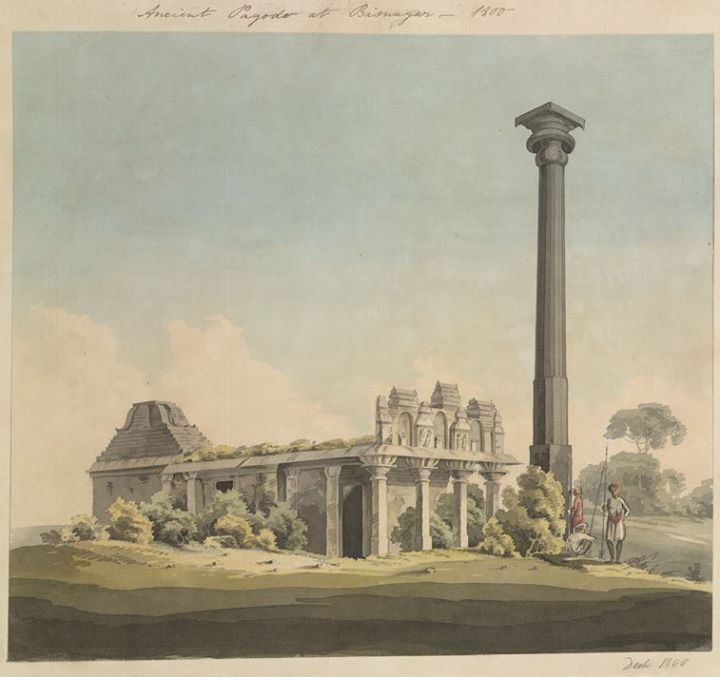 Temple and pillar at Vijayanagara - 1800

Water-colour from the MacKenzie Collection of a temple and pillar at Vijayanagara, dated December 1800. Inscribed on front in ink: 'Ancient Pagoda at Bisnagar. 1800'; in pencil: 'Decr. 1800.'

Vijayanagara, the City of Victory founded in 1336, was the capital of the most powerful Hindu kingdom in Southern India until the defeat by the Muslim armies in 1565. The city was established on the site of the village of Hampi situated in a spectacular rocky landscape along the southern bank of the Tungabhadra river. The ruins of the royal town comprise sacred and a royal buildings. Many temples were built from the eighth century onwards. This watercolour possibly depicts the Kunthunatha (Ganagitti) Jinalaya at Kamalapur, a village south of Hampi with numerous Hindu temples.

What a destruction caused by fanatic Muslims. It was our weakness in military science and training that could be held the prime cause of our weakness.

Hampi is really an exciting place for exploring history and architecture