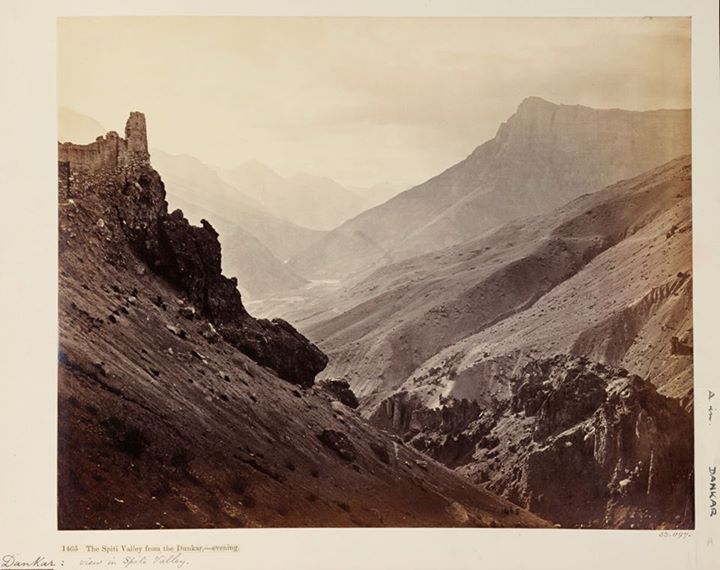 The Spiti Valley from the Dunkar - 1866
By Samuel Bourne

Taken from a high viewpoint this photograph looks down and through a valley of high mountains. In the foreground in the top left hand side is a corner of a ruined building, possibly part of the Dankar fort. As the mountains recede into the distance, below them the river can be seen winding its way though the valley.

Samuel Bourne wrote and published an account of his journey in which he mentions the places that he photographed. Below is the relevant section for this photograph:

'At length we arrived at a curious and picturesque village called Dunkar, the outpost of the British territory in this direction…..The houses were built into the sides of the hill, which have been scooped out by nature into holes and caravans; and the way these had been taken advantage of and built into, until the hand of man and the hand of nature seemed to unite, was ingenious and picturesque. I had taken two views of the village from opposite sites and one or two looking up at it from the Spiti valley, and proceeded to take a closer view of one particular part of the village more picturesque than the rest.'

Bourne, S, A Photographic journey through the Higher Himalayas, The British Journal of Photography, 14 January 1870, page 16.

Your posts on Himalayan landscapes have been an absolute treat.