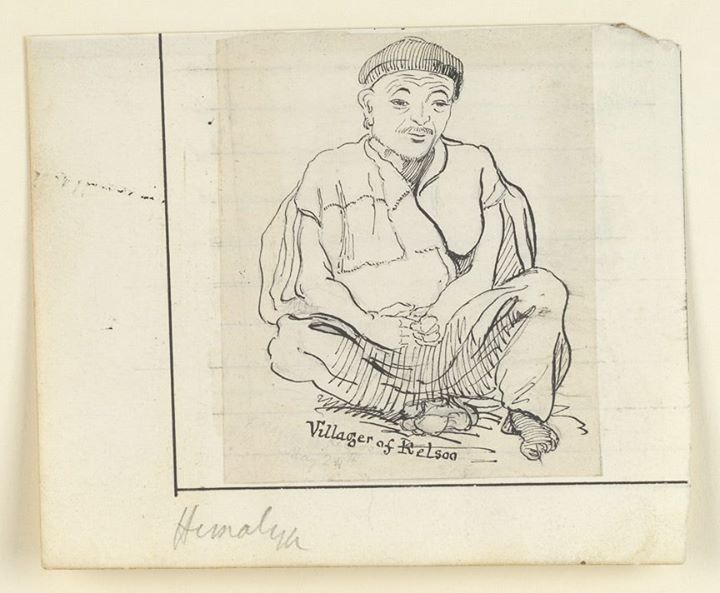 
Image:
A villager of Kelsu in the Himalyas. On back, sketch of a milk stoup and waterlathe, and part of a journal - 1849

Pen-and-ink drawing by Sir Henry Yule (1820-1889) of an villager from the Himalayas, in Uttar Pradesh, dated 1849. On the back of the sheet is a sketch of a milk stoup, a waterlathe and part of a journal kept by Yule during his holiday in the Himalayas. The image is inscribed on the front in ink: 'Villager of Kelsoo'. Sir Henry served with the Bengal Engineers in India from 1840 to 1862. From 1845 to 1849 he worked in the North West Provinces, with a group of brilliant young engineers, restoring and developing the old Mughal irrigation system. Work on this project was interrupted by the First and Second Sikh Wars (1845-6 and 1848-9) in which Sir Henry participated. He is perhaps best known for his work on the 'Hobson-Jobson' (London, 1886), a glossary of Anglo-Indian colloquial words and phrases.

Somehow, it seems that proximity to the Himalayas is directly proportional to how calm a person looks, at least in paintings. Or is it probably the painter projecting his own preconceptions onto his work?

I think the sketch is more akin to how these people look like. These people are very natural, very naive and trustworthy. But when they come to cities for earning they are exploited tremendously and their world gets shattered...