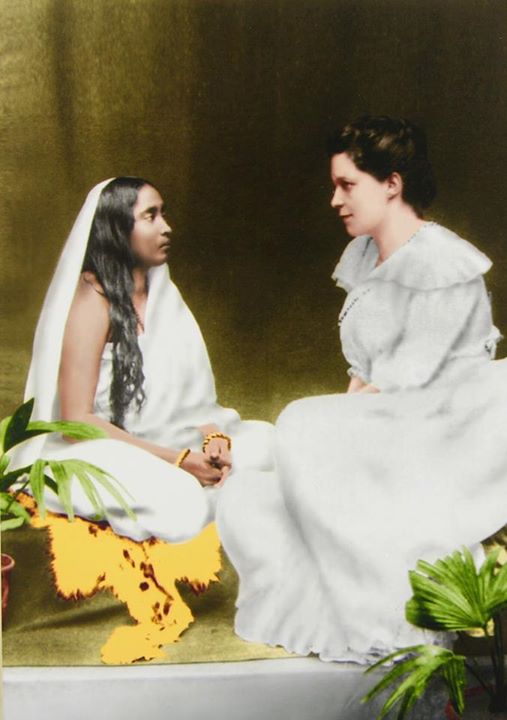 The woman pausing in the dying light to salute the river brings us to another such instance. There is nothing occult in the passion of Hindus for the Ganges. Sheer delight in physical coolness, the joy of the eyes, and the gratitude of the husbandman made independent of rain, are sufficient basis. But when we add to this the power of personification common to naives peoples, and the peculiarly Hindu genius of idealism, the whole gamut of associations is accounted for. Indeed, it would be difficult to live long beside the Ganges and not fall under the spell of her personality. Yellow, leonine, imperious, there is in her something of the caprice, of the almost treachery, of beautiful women who have swayed the wills of the world. Semiramis, Cleopatra, Mary Stuart, are far from being the Hindu ideal, but the power of them all is in that great mother whom India worships. For to the simple, the Ganges is completely mother. Does she not give life and food ? To the pious she is the bestower of purity, and as each bather steps into her flood, he stoops tenderly to place a little of the water on his head, craving pardon with words of salutation for the touch of his foot. To the philosopher she is the current of his single life, sweeping irresistibly onward to the universal. To the travelled she tells of Benares and the mountain snows, and legends of Siva the Great God, and Uma Himavutee, mother of all womanhood. Or she brings memories of the Indian Christ and His youth among the shepherds in the forests of Brindaban on her tributary Jumna. And to the student of history she is the continuity of Aryan thought and civilisation through the ages, giving unity and meaning to the lives of races and centuries as she passes through them, carrying the message of the past ever into the future, a word of immense promise, an assurance of unassailable certainty. But with all this and beyond it all, the Ganges, to her lovers, is a person. To us, who have fallen so far away from the Greek mode of seeing, this is difficult perhaps to understand. But living in a Calcutta lane the powers of the imagination revive ; the moon-setting becomes again Selene riding on the horse with the veiled feet ; Phoebus Apollo rising out of one angle of a pediment is a convincing picture of the morning sky; and the day comes when one surprises oneself in the act of talking with earth and water as conscious living beings. One is ready now to understand the Hindu expression of love for river and home. It is a love with which the day's life throbs. "Without praying, no eating ! Without bathing, no praying ! " is the short strict rule to which every woman at least conforms ; hence the morning bath in the river is the first great event of the day. It is still dark when little companies of women of rank begin to leave their houses on foot for the bathing-stairs. These are the proud and high-bred on whom " the sun has never looked." Too sensitive to tolerate the glance of passers by, and too faithful to forego the sanctifying immersion, they cut the knot of both difficulties at once in this way. Every moment of the ablution has its own invocation, and the return journey is made, carrying a brass vessel full of the sacred water which will be used all day to sprinkle the place in which any eats or prays.

The woman on the left is not Sri Sri Ma, she is Sarada Devi

Ya , she is sharda devi ( wife of Shri Ramkrishna )......i have never seen this photograph before...