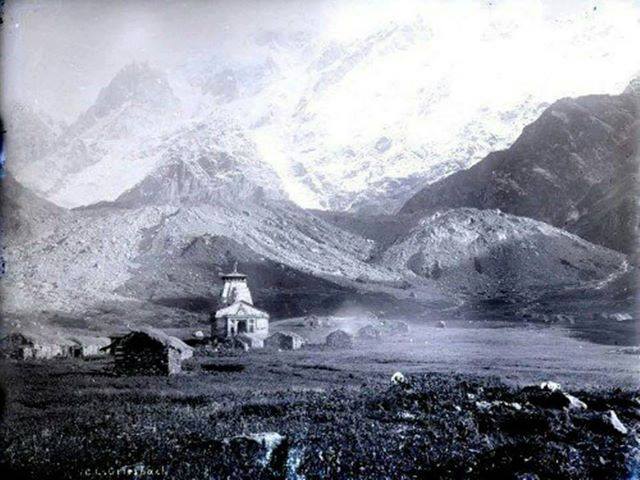 Some more rare images of Kedarnath at the Geological Survey of India website:

Amidst the dramatic mountains capes of the majestic Kedarnath range stands one of the twelve 'Jyotirlingas' of Kedar or Lord Shiva, the protector and the destroyer. Lying at an altitude of 3584 metres (11,760 feet) on the head of river Mandakini, the shrine of Kedarnath is amongst the holiest pilgrimages for the Hindus.

The origin of the revered temple can be found in the great epic - Mahabharata. According to legend, the Pandavas after having won over the Kaurava in the Kurukshetra war, felt guilty of having killed their own brothers and sought the blessings of Lord Shiva for redemption. He repeatedly eluded them and while fleeing took refuge at Kedarnath in the form of a bull. On being followed he dived into the ground, leaving his hump on the surface. This conical protrusion is worshipped as the idol in the shrine.

The remaining portions of Lord Shiva are worshipped at four other places - the arms (bahu) at Tungnath, mouth (mukh) at Rudranath, navel (nabhi) at Madmaheshwar and hair (jata) at Kalpeshwar. Together with Kedarnath, these places are known as the Panch Kedar.

An imposing sight, standing in the middle of a wide plateau surrounded by lofty snow covered peaks. The present temple, built in 8th century A.D. by Adi Shankaracharya, stands adjacent to the site of an earlier temple built by the Pandavas. The inner walls of the assembly hall are decorated with figures of various deities and scenes from mythology. Outside the temple door a large statue of the Nandi Bull stands as guard.

The Samadhi of Adi Guru Shankaracharya is located just behind the Kedarnath temple. It is said that after establishing four sacred Dhams in India, he went into his samadhi at an early age of 32 years.

Approximately, When was the Kedarnath Temple built?

In all probability...lost in myth and legend. Kedarnath is supposed to have been mentioned even in the Mahabharata.

Kēdārnāth Mandir (Kedarnath Temple) is one of the holiest Hindu temples dedicated to the god Shiva and is located on the Garhwal Himalayan range near the Mandakini river in Kedarnath, Uttarakhand in India. Due to extreme weather conditions, the temple is open only between the end of April (Akshay trutya) to Kartik Purnima (the autumn full moon, usually November) every year. During the winters, the vigrahas (deities) from Kedarnath temple are brought to Ukhimath and worshipped there for six months. Lord Shiva is worshipped as Kedarnath, the 'Lord of Kedar Khand', the historical name of the region. The temple is not directly accessible by road and has to be reached by a 14 kilometres (8.7 mi) uphill trek from Gaurikund. Pony and manchan service is also available. The temple is believed to have been built by Pandavas and revived by Adi Sankaracharya[1] and is one of the twelve Jyotirlingas, the holiest Hindu shrines of Shiva. Pandavas were supposed to have pleased Shiva by doing penance in Kedarnath. The temple is also one of the four major sites in India's Chota Char Dham pilgrimage of Northern Himalayas. Courtesy: Google

It is believed that the temple was built by Adi Shankara. There are conflicting statements about Shankaracharya's birth year. It could be 509 BC, 44 BC, 788 AD . Anyway, it is more than 1000 years old.

BBC says its a GSI (Geological Survey of India) picture taken in 1882 during Great Trigonometric Survey which was a project of the Survey of India throughout most of the 19th century.

The Gods have certainly spoken on this one

this is how it was meant to stay... we are now back to the past

lets go back to this era

Those pictures are amazing when you realize what photography was like in those days.

The temple is believed to have been built by Pandavas and revived by Adi Sankaracharya[1] and is one of the twelve Jyotirlingas, the holiest Hindu shrines of Shiva. Pandavas were supposed to have pleased Shiva by doing penance in Kedarnath.

Kedarnath is named in honor of King Kedar, who ruled in the Satya Yuga. He had a daughter named Vrinda who was a partial incarnation of Goddess Lakshmi. She performed austerities for several years and the land is named after her as Vrindavan. However, Kedarnath and its temple exist from the Mahabharata Era when the Pandavas are supposed to have pleased Lord Shiva by doing penance there

Is it just me or do you also see a striking resemblance of roman style architecture, especially the front part of the Kedarnath Temple.

According to an ASI report there are a few Brahmi inscriptions on some slabs on the temple dating back to the Mauryan times. There is also a definite Gandharan influence in certain facets of this building e.g. the bust of Shiva (possibly) on top of the doorway which is strikingly different when compared with other Hindu sculptures. Image: http://bit.ly/1aCuJsd

time to burn it down. what is the use of such believe if it takes ur life. god is just a method to earn money, a business and nothing else.

How peaceful it would have been.

Nature decides and we just have to follow it....

we should leave this place in peace!!

nature has again turned it like this... hope it remains this way...!!

Thanks for giving in a nutshell.

Namah Shivya, Shiv ji made sone ki Lanka, but he never reside there, he like akant and lonely place.

Purba thanks for posting.

Lovely photograph takes you back in time. Those days must have been really challenging for the Rawal.

good.....stop making a tamasha in the name of religion....

so serene, when there were no buses, taxis, petrol, hotels

Thanx for giving knowledge of facts which all must know, enjoyed alot to read abt our Mythology nd Epics bt all pandavas died in these mountains only nd their last cremation was done by none, their bones wr ruined nd scattered in these mountain vallies only. Now what I hv read in news that this temple nd shrine of Shankeraya, samadhi has also got destroyed, let historians reach there to tell us more recent facts, om namah Shivay.

This is a lovely picture! So pristine, so uncluttered by tourists, so holy!

when Greedy Politicians ruin nature for their pockets to be filled. we get into such deadly suituations

they should have maintained like this with few huts around it ....people should go worship and come back immediately...

Johny, thnx for sharing. they are mind-blowing!

In October, 2000 I had visited this great place alongwith my -in laws and their three friends. The valley appeared to me 1.5 km. wide and 2 km in length starting right from the Nandi statue. The central road was muddy 10' wide on both left and right side of the roud there were 20 to 25 shops selling puja materials. We stayed in MAHARASTRA VIKAS MONDAL house. After registering I wnt to the roof of the building - was awaed by the great silence of snow caped KEDAR DOM as if the peak just stands in front of me ...

back to square one

should have left it as it was.

thank u for the information

beautiful so serence .. how nature did decide to deface itself?

This pic must be before Sankaracharya died..coz it doesnt show the samadhi?

Was photography developed to this extend in those days? and what was the procedure for maintaining then?

http://ibnlive.in.com/news/kedarnath-shrine-was-under-snow-for-400-years-scientists/401906-3-243.html But this picture disproves the above claim !

Wonderful. Makes one want to travel there immediately - and back in time.