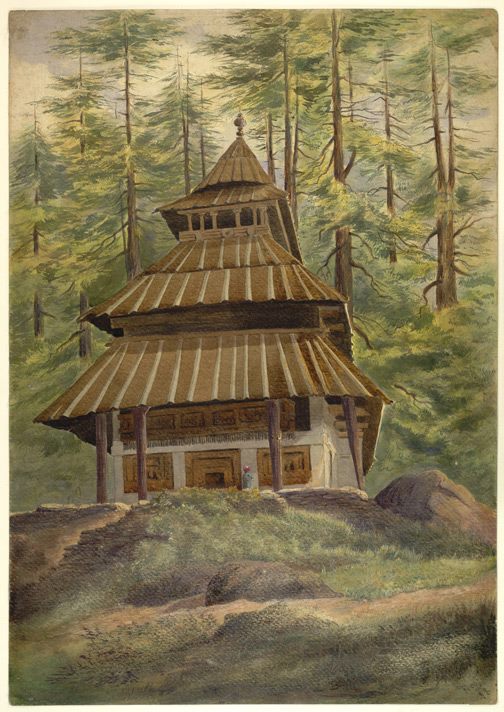 Water-colour drawing by Alfred Frederick Pollock Harcourt of the Hidimba Devi temple near Manali, Kulu, dated 1870. Inscribed on front in water-colour: 'A.H. Kooloo'; on back in pencil: 'Minali Temple Kulu. Doongree Temple Menalee. 1870.' This Hindu temple is situated in a sacred cedar forest 2 km from Manali. It is dedicated to the goddess Durga whose image is enshrined in the sanctuary built over a rocky cleft. The temple has a 24 metres high tower which consists of three tiers of square roofs covered with timber tiles while the conical roof is clad in metal. The wall are of unadorned mudcovered stonework while the wooden doorway is elaborately decorated with miniature depicting the goddess, animals and attendants.

Why would the Hidimba Devi Temple be "dedicated to Durga?" She was Bhima's wife.

there were no khap panchayats in those days..you just roam around the country..marry the girl or boy you liked ..have a child or two and then move on..in life..Bhasa has a written a play in sanskrit : http://en.wikipedia.org/wiki/Madhyamavyayoga

Sumana Raychaudhuri my question too or more appropriately why would a Durga Temple be christened Hidimba is what I'd like to k ow? Love to know the story behind it. Anyone?

Her son, Ghatotkacha, is also worshipped in the region.

Sheesh, if you do that here, the child goes crazy.

Have heard about Hidimba temple but unsure whether I remember anything about the deity inside.

been to the hidimba temple near manali in himachal pradesh... yes the ghatotkach shrine is under a tree a few meters from this temple...

we visited this temple 28 years back.

wow..it was a stone and wood affair some 26 years back....wonder what it looks like now?

Still a very beautiful place, and well maintained by the family of "royal carpenters" in Dhungri. I live in their house part of the year, so Hadimba temple is just near by (and I have a wooden model in my place in Paris, made by the same carpenters).

I am curious about the 'royal carpenters' of Dhungri- would Dominique Dufau be able to provide a little potted history about them?

first came 43 years ago ~It is a Timeless Magical spot