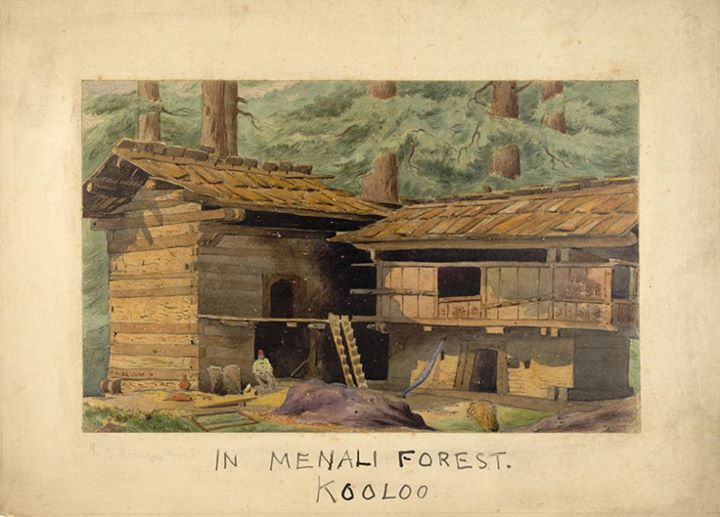 Watercolour by Alfred Frederick Pollock Harcourt (1836-1910) of wooden houses at Manali in Kullu in the modern-day state of Himachal Pradesh, dated 24th June 1870. The image is inscribed on the front in water-colour: 'A.H. 24 June. 70'; and on the mount in pencil: 'In the Doongree Forest'; and in ink: 'In Menali Forest. Kooloo.' Harcourt served with the Bengal Infantry in India from 1855 to 1889, and was made Assistant Commissioner for the Punjab around 1868-70. He found the Punjab Hills a particularly inspiring landscape for painting and drawing. His book 'The Himalayan districts of Kooloo, Lahoul, and Spitti' was published in 1871 and illustrated with lithographs from his drawings. Harcourt wrote, "Some of the Kooloo villages are large, and have over a hundred houses; but others, again, are merely detached clusters of a few buildings, which in either case follow, in certain particulars, the architectural details to be found in Switzerland. The walls, occasionally whitewashed or plastered with mud, are formed of tiers of beams and rubble masonry, the timbers for the ceilings of the lower and upper storeys projecting, the first to receive the verandahs, and the second to support the slates of the main roof. The entrance is from below, a rough ladder leading to the household apartments; but, where the verandah is of no great height from the ground, a similar ladder, formed of a log cut in niches, leads direct to the upper rooms. The verandahs may either extend all round the house, - and this they often do, but on two sides, being closed in to the main roof for the greater part, openings however being left here and there by means of carved windows. In the poorer style of dwelling the verandahs are left open all round, with now and then a projecting railing between the supports, and it is the fashion, in the loftier houses, to have one or two poles projecting out below the verandahs, across which broad flat planks are loosely placed. Below is the paved enclosure, used for treading the corn, oil-pressing, rice-cleaning, or for spreading out the hay to dry."

This is what FLW meant as organic architecture .