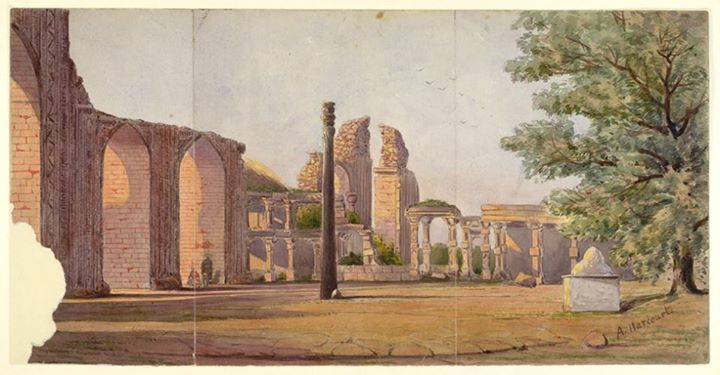 
Image:
Iron pillar and screen of arches on west side of the Qutb Mosque, Delhi - 1865

Water-colour painting of the Iron pillar and screen of arches on the west side of the Qutb Mosque, Delhi by Alfred Frederick Pollock Harcourt (1836-1910) in 1865. Inscribed on the front in ink is: 'A. Harcourt'; on back: 'Interior enclosure of the Bhoot Khana or Idol Temple at the Kootub near Delhi. Converted by the Mahomedans into a' 'Mosque.'

The Iron Pillar is in the centre of the courtyard of the Quwwat-ul-Islam Mosque (begun 1193), one of the oldest surviving mosques in the sub-continent. The pillar is 7.2 metres tall and 37 cm in diameter and was once topped with an image of Garuda, a Hindu bird god. It is dated to the Gupta period with Sanskrit inscriptions from the 4th or 5th century. The origins of the pillar remain obscure, although it was possibly taken from a Vishnu temple before the construction of the complex. Virtually rust-free, the pillar is 98% pure iron and is a puzzle to metallurgists. Legend has it that anyone who can encircle the column with their arms behind their back will have their wishes granted. The Quwwat-ul-Islam congregational mosque complex was begun by the Ghorid general, Qutb-u'd-din Aibek as the first major Muslim construction in the newly conquered capital at Delhi following the defeat of the local Hindu rulers in 1192.

Nothing like it!Anybody got books on Delhi, India please contact me.Am willing to purchase in any condition.

The origins of the pillar remain obscure, although it was taken from a Vishnu temple Vishnu-Path, Gaya, Bihar before the construction of the complex.