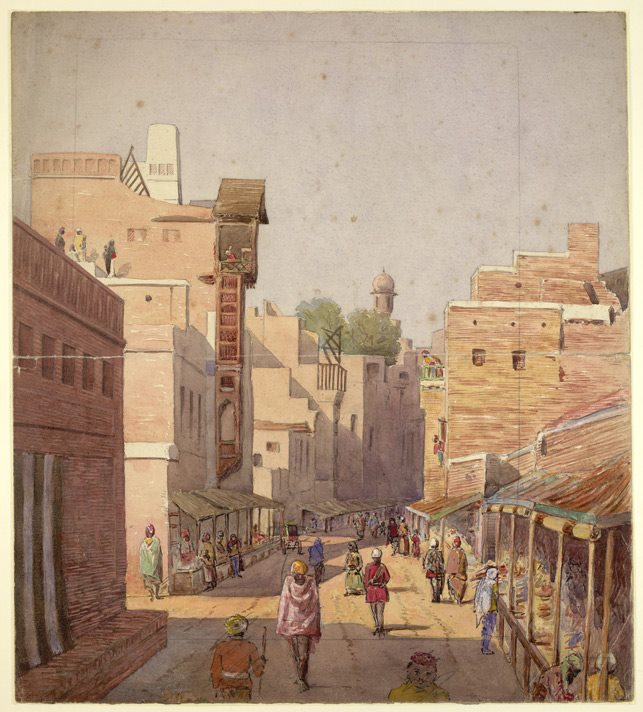 Lahore has been subject to many different ruling dynasties over the centuries but came to prominence under the Mughals after Babur defeated the Lodi sultan of Delhi, Ibrahim Lodi Shah at Panipat in 1526. This following two centuries saw the construction of some of the finest monuments in South Asia. Lahore was the capital city of Emperor Akbar from 1584 to 1598. He built the massive Lahore Fort on the foundations of a previous fort and enclosed the city within a red brick wall boasting 12 gates. Jahangir and Shah Jahan extended the fort, built palaces and tombs, and geometrically planned gardens. The great Badshahi Masjid and the Alamgiri gateway to the fort itself were built by the last of the great Mughals, Aurangzeb (1658-1707). Ranjit Singh (1780-1839) was the famous Sikh leader who ruled the Punjab (modern Pakistan) from 1799 to 1839. Following the Second Sikh War in 1849 the British occupied Lahore for almost a century.

So quiet and relaxed.

This street still exists, it's quite emotional to travel back in time. It must also bring back memories of other Punjabis by birth or adoption as such a street truly reminds of Punjab in general, regardless of borders.

Thanks for sharing this beautiful painting. Some of the back streets are still the same although old houses replaced by new houses. The people of Lahore are called Zinda Dilan e Punjab. They are open hearted, hard working men and women who love to eat, laugh and do kabbadi. Not a Lahorite by birth, I lived 5 precious years of my life in Lahore and earned my Medical degree from FJMC, Lahore. I left Lahore long time ago but Lahore did not leave me. Its in my heart ♥