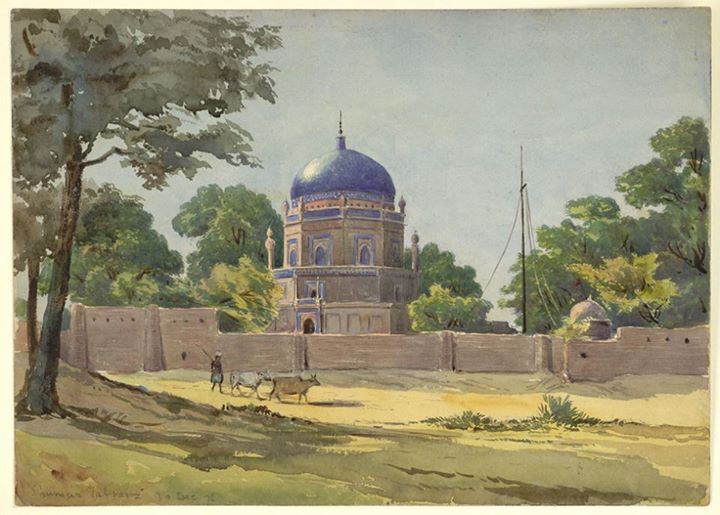 Watercolour by Alfred Frederick Pollock Harcourt (1836-1910) of the tomb of Shams-i Tabriz at Multan in the Punjab, Pakistan, dated 30th December 1876. The image is inscribed on the front in pencil: 'Shumuz Tabraez. 30 Dec 76'; and on the back in ink: 'The Shumus Tabraez Musjid Multan, Alfred Harcourt.' This tomb was rebuilt in 1780 and belongs to a celebrated Sufi martyr who was murdered in 1247. The main body of the building is a square surrounded by a verandah. The upper section is octagonal, surmounted by a hemispherical dome and covered in glazed blue tiles. Some parts of the walls are decorated with glazed tiles, mainly blue and white, arranged in geometric patterns.

I wonder what the pole with ropes on the right was meant for ?

Wonderful, I had no idea he had such a beautiful tomb.

Bianca Alfieri, in her "Islamic Architecture of the Indian Subcontinent", says that this tomb is erroneously attributed to Shams-i Tabrizi and is actually of the Ismaili Shams Sabzawadi, built around 1329. The glazed-tile decoration is now green in color.