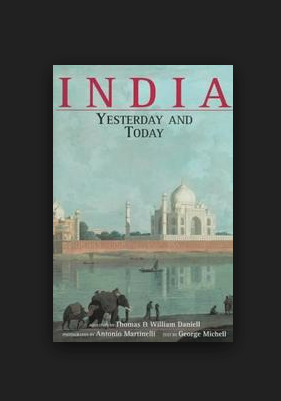 The 18th-century aquatints by the Daniells and Martinelli’s 21st-century photographs of the same subjects are presently on display juxtaposed against each other at an exhibition called ‘Oriental Scenery — Yesterday and Today’ at the Indira Gandhi National Centre for the Arts (IGNCA). The 73 aquatints and 73 photographs show how the landscapes of the places the Daniells visited have changed over two centuries. There are some aquatints and pictures of Delhi too, of the Jantar Mantar, which was not in use when the Daniells visited Delhi, of east gate of Jama Masjid (spelt Jumma Musjid by the Daniell). The Jama Masjid picture shows grand sweep of steps, with a procession of elephants, horses, and palanquins. But the photographs taken by Martinelli 200 years later from the same angle, shows how the entire sweep of steps of Jama Masjid has been obscured by ugly encroachments. Then there is another Delhi aquatint of Qutab Minar, which shows a small crowning pavilion , which is no more there in Martinelli’s photograph.

The Daniells’ completed their trip through India in nine years, while Martinelli covered his trail in two years — between 1995 and 1997. But following Daniells’ trail for the then-and–now picture project was quite an arduous task. “Daniell set sail from Calcutta by boat and I travelled by car. Each of my pictures has a story. It was very difficult to find some of the monuments and temples as they were in the interiors of the country and even local people did not know about them. At times, it was quite difficult to find a safe room for overnight stay and meals were not always available,” said Martinelli.

Read a review of this exhibition:

give me in pdf format