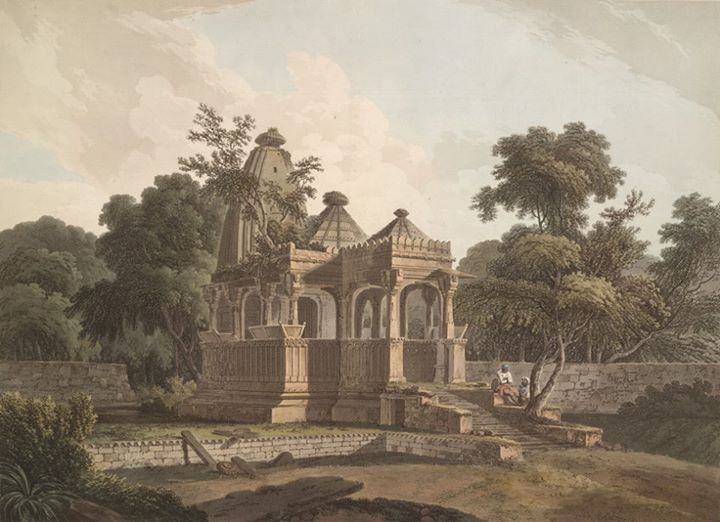 Essay:
An Estimation of the Work of Thomas and William Daniell in India
By Shashi Kolar

Thomas and William Daniell, the uncle-nephew team best known for their paintings and aquatints of Indian landscapes that served to popularly introduce the Indian scene to the British public, have remained consistently popular with collectors, historians and those interested in the dynamics of colonial representation ever since their works were published nearly 200 years ago. Such popularity does come with shifting opinions of their artistic merits as new light on the political and cultural ecosystem of the times is shone.

If one seeks to judge the Daniells considering similar motives among artists extant in India either immediately before, during of after their tours in India, the fact cannot be escaped that their renditions provide the most faithful representations of the sights depicted. The only landscape painter of note to have gained something of a following prior to their departure was William Hodges, who's work about the land were well received. Most other practicing artists in the subcontinent involved themselves in portraiture, either for wealthy EIC servants, native rulers and merchants or to augment "European upholstery" in newly built public buildings or places of worship.

Moreover, Hodges expeditions around India were buffeted by political events or ill health, something the Daniells knew they would have to face, embarking within a year of Hodges arrival back in England. There was also the not inconsiderable matter of artistic taste that Hodges appealed to, that of the transporting nature of the Sublime in exotic lands, which was at variance with the Picturesque school of the Romantic movement in landscape painting that the Daniells espoused. The latter required them to be less dramatic, but more authentic in their portrayal. While such a movement had gained currency in Britain to depict the garden prospects of the aristocrats and the landed gentry along with natural landscapes that the country afforded, it was unclear if the same enthusiasm would be extended to architectural landscapes of an as yet unfamiliar Orient (though the Nabobs could be counted upon to seed such interest in the market).

Their use the the Camera Obscura and the perambulator to aid in faithful capture of perspectives, architectural outlines and decorative details weren't done in secret (unlike many other European artists of the preceding centuries; for example, Van Eyck is rumored to have used the Camera Obscura for his famous "The Arnolfini Marriage" without documenting so). William Daniell freely records such use by himself and his uncle in his diaries. The resultant engravings based on these sketches - very much at variance with the freehand techniques of Hodges - "would be praised, correctly, for their undeniable and authoritative accuracy over and above any artistic merit or vision." (page 191, "Indian Renaissance: British Romantic Art And the Prospect of India"). The praise for such accuracy flowed from professional cartographers, surveyors, magazines and even artists like Hodges and James Forbes who had labored in India previously. Thus, they clearly did not intend to be demonstrative of superior artistic talents at the cost of authoritative reproductions.

They, of course, weren't company artists, cartographers or demographers but painters aiming at a non-specialist market, and thus did take liberty in their final compositions around the framework derived from scientific methods. It should come as no surprise then that James Fergusson, who's concern with architectural details surpassed that of the Daniells, lamented about the lack of details in their works, and set about with the Camera Lucida to gather even better versions of monuments.

While patrons and auctioneers have their reasons for favoring one body of work over another, artistic merit might not always rank high among them, prompting those better initiated like E.B Havell to remark about the pretentiousness of contemporary European and native collectors of art which did not always serve to encourage works worthy of attention. As remarked in the chapter titled "The Degradation of Indian Art" in "Indian Sculpture and Painting", Havell derides the hankering after "bad copies or counterfeits" of Western art against an enlightened understanding of native art and iconography or faithful representations of them. The Daniells weren't interpreting India through a spiritual or religious prism, but doing so as how a landscape painter is trained to process his or her subject, something that cannot be said to the quasi-European works of Ravi Varma that both Havell and Coomarasway dismiss.

Therefore, the popularity of the the Daniells, aided by imperial projects, the wealth of the EIC servants and their own industry is justified. Under what parameters are they judged depends on what is being judged - artistic prowess, accuracy or adherence to a particular school, but as far as architectural landscapes of India are concerned, there cannot be too many equals.

Image:
An Ancient Hindoo Temple, in the Fort of Rohtas, Bihar - 1796

Plate 11 from the first set of Thomas Daniell's 'Oriental Scenery.' The Daniells were very taken with this small mediaeval temple of traditional north Indian form, which they found within the great hill fortress of Rohtasgarh. The artist noted that, 'The Hindoos, who formerly preferred elevated places for their temples, could not, it would seem, resist the temptation of building in this place, the situation being delightful, and water and wood, with every other convenience abundant.' Its porch lin 1800 served Thomas Daniell as a model for his design for a monument to Warren Hastings in Melchet Park in Wiltshire.