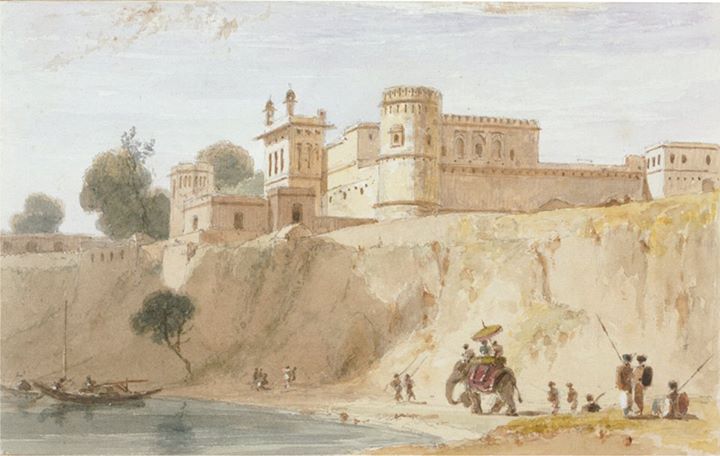 Watercolour depicting Anopshur, a large castle-like structure serving as a military station or fortress. It is situated on the top of a cliff and people riding elephants, boats and small groups of people with tools are visible on a small beach below. Inscribed with title.

This castle was built by Raja Anup Singh of Bulandshahar on an area , Anopshur, donated by Mughal Emperor Jahangir. There is a legend that Anup Singh saved the life of the emperor from a lion during a hunting expedition. Jahangir also had his eldest prince held in confinement in this palace. Much of this castle was destroyed during 1857. http://www.harvardartmuseums.org/art/71763

The description given in the link above (ahttp://www.harvardartmuseums.org/art/71763) says just the opposite. It shows clearly that Emperor Jahangir and Shahzada Khurram are saving the life of Raja Anup Singh from a lion - not the other way around. Also, the picture shows a lion. Were there lions in the Anupshahr area along the River Ganges in the 17th century?

Mr Asad Ahmed, yes I too realised the title later, but there is no denying that Jahangir was saved by Raja Anup ( Imperial Gazetteer of India, Volume 5,Page 388).The hunting might have taken place elsewhere but the land at Anupshahar was gifted. Lion hunting was his favourite and he went upto Gir to hunt.

Is this palace of Raja Anup completely destroyed now? Anupshahr was transformed into a large cantonement for the British troops during the Indian 'mutiny'.

This is page 388 of the Imperial Gazetteer of India, volume 5. There is no mention of the encounter of Raja Anup or Emperor Jahangir with a lion. "ANUPSHAHR TOWN 78� 6' E., 25 miles east of Bulandshahr town, on a metalled road. Population (I90o), 8,6oi. It was founded in the reign of Jahangir by the Bargujar Raja Anup Rai, from whom it derives its name, and was of great importance in the eighteenth century as commanding an important crossing of the Ganges on the road from Delhi to Rohilkhand. In 1757 Ahmad Shah Durrani established cantonments here for a time, and returned to them in '759. It was from this place that the coalition was organized which led to the overthrow of the Marathas at Panipat in I761. In 1773 the combined forces of the Oudh Wazir and the British made Anupshahr their rendezvous when opposing the Maratha invasion of Rohilkhand; and from that date till i806 Anupshahr was garrisoned by British troops, afterwards removed to Meerut. During the Mutiny the Jats successfully defended the crossing of the river by the rebels from Rohilkhand. The town stands on the high bank of the Ganges and is well drained. There is a fine bazar, and besides the tahsit a dispensary is maintained. The Zanana Bible and Medical Mission and the Church Missionary Society have branches here. Anupshahr has been a municipality since i866. During the ten years ending 1901 the income and expenditure averaged Rs. 9,000. In 1903-4 the income was Rs. 1I,ooo, chiefly derived from octroi (Rs. 6,ooo); and the expenditure was Rs. ,00ooo. The town was formerly the northern limit of traffic on the Ganges, and a factory of the East India Company was maintained here for some time; but the construction of the Naraura weir in i878 cut it off from the lower reaches of the river, and at present it is merely a dep6t for timber and bamboos. The through trade across the river has also been diverted by railways, and at present sugar is the chief article of commerce. There is a small manufacture of cloth, blankets, and shoes for the local demand. The tahsil school contains i60 pupils, and there is also a Mission Anglo-vernacular school.