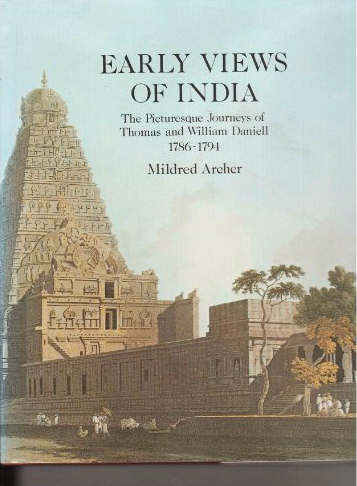 In 1954, the India Office Library invited Mildred Archer to catalogue a "few miscellaneous Indian paintings". The task was expected to take a few weeks only, but led to 25 years based at the library: it was the start of a project that significantly helped to shape our understanding of artistic activity in and on India in the period from the late 18th to the early 20th centuries, as is shown by the dense bibliography of Archer's writings.

As Archer delved in the Reading Room and Iron Room of the library's then premises in King Charles Street and looked for missing parts of series in the old India Office (now the Foreign and Commonwealth Office), she identified more and more groups of the drawings and engravings made mainly for the British by both British and Indian professional painters.

A steady stream of publications began to appear, some driven by exhibitions - for example, The Daniells in India (1960) accompanied the Commonwealth Institute exhibition of watercolours and drawings made by William and Thomas Daniell on their Indian tours in the late 18th century; others came about by the disciplined, systematic and accumulative work of cataloguing the collection.

I am happy to have it in my library ! (Baught in Mumbay many years ago)

Obituary: Mildred Archer Pioneer expert on, and collector of, Indian painting under the Raj By Robert Skelton The Guardian, Thursday 17 February 2005 Mildred Archer, who has died aged 93, was a pioneer in the previously neglected field of Indian art under the Raj. She was the first to bring it to general attention and remained a pre-eminent authority from her first book in 1947 to her last in 1992. The works that attracted her interest were paintings made by Indian artists for Europeans during the 18th and 19th centuries, and also works by European artists under Indian patronage. Paintings for Europeans illuminated aspects of Indian life that were hardly represented in indigenous traditions of Indian painting. Archer's publications reveal almost as much about the social history of the subcontinent as its art. The range of her work was such that her name will always be associated with what came to be called Company paintings; her legacy will long be mined by scholars. Read more: http://bit.ly/14yfIFh

Mildred's husband, W.G. Archer (referred to as Bill Archer in the obituary linked to in this thread), too was an Indologist. The V&A museum's collection of Parari paintings is due to his efforts. His famous book on the subject is http://amzn.to/1a6OPuu. I found the book, like many others, in the second-hand shops around Flora Fountain, Mumbai.

This is the famous Tanjore temple.

Great book. Acknowledges the work of Maurice Shellim in his research on the works of Daniells. Shellim's book ( with introduction by Archer) on Daniells paintings & also his other book dedicated to just one Daniell painting ( The Waterfall of Papanasam), also recommended for the Daniell enthusiasts.

The book to read is "India observed and Served" jointly written by william and Mildred...riveting anecdotes.Picked it up at a Book fair in delhi some years back. Both were mordant of the British deportment of the times, despite William being a civil servant. The listing in the book suggests, other than Pahari painting book (as mentioned by Shashi), a compendium of publications on Punjabi painting, tribal law, visions of courtly India,Indian marriage sermons, etc. William was also known as 'butcher' for ordering to open fire on students demonstrating in Patna in 1941.