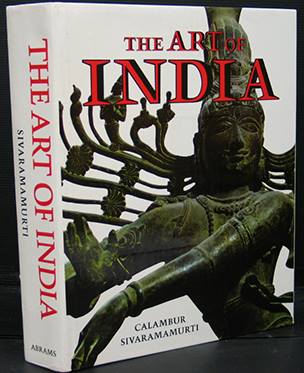 A must-have classic:
The Art of India
By Calambur Sivaramamurti
Published by Harry N Abrams - 1993

Originally published in 1977, this welcome reissue offers an impressive introduction to a vast and complex field encompassing the otherworldly mystery of the Taj Mahal, the glorious mural paintings in the fifth-century cave temples of Ajanta, exquisite Mogul miniatures, serene statues of the Buddha and soaring temples of almost hallucinatory impact. Beneath these diverse forms, Sivaramamurti, former director of the National Museum in New Delhi, sees an underlying spiritual unity. Augmented with 1175 plates (180 in color), the book sweeps from naturalistically rendered animals and sophisticated statues of ancient Mohenjo-Daro, a city that flourished 2500 years before Christ, to the elegant monuments, sculptures and paintings nurtured by medieval Hindu dynasties. With erudition lightly worn, the author relates the saga of India's art to the country's religions, literature and myths.

A book which illuminates the aesthetic heritage of the Indian subcontinent, from its beginnings before recorded history, through its great flowering under the powerful Hindu dynasties. Each chapter is a self-contained essay on a particular aspect of Indian culture, history or religion. The author presents each work in its cultural environment, making the reader aware of the distinctive spirit - a unique mixture of theology, literature, and aesthetic principle - that animates the great body of Indian art. One of the most important features of this book is the section on Indian archaeological sites. More than 130 areas are described and this text is supplemented by over 300 pictures.

I used to have that book. Sold it LA years ago.

learned of many new sites from this beautiful book.

Thank you Shashi Kolar! I have posted this video and some others when I carried out a series on Vilayanur Ramachandran (one of my favorite scientists ever) twice earlier. Will post it again...as public memory has been reputed to be short.

Won it as a prize in a graphic design competition in '83! Still have it.