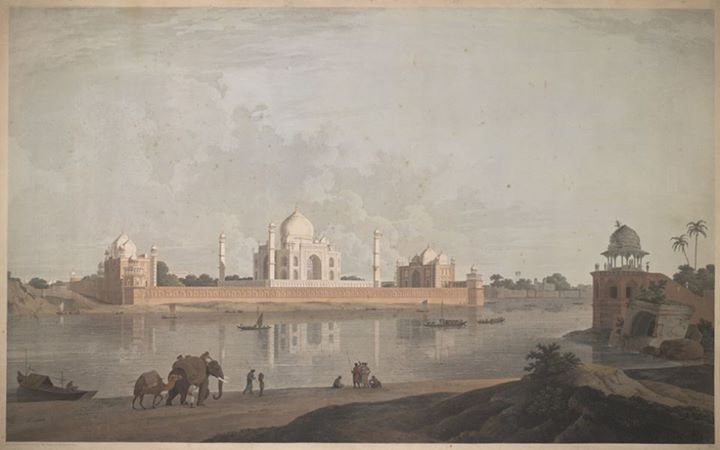 Coloured aquatint by Thomas and William Daniell of the Taj Mahal at Agra, dated 1801.

This print, together with the one entitled "The Taje Mahel, Agra. Taken in the garden", was published in 1801 with a separate booklet, 'Views of the Taje Mahal at the City of Agra in Hindoostan taken in 1789'. Thomas remarked, "The Taje Mahel has always been considered as the first example of Mahomedan architecture in India, and consequently, being a spectacle of the highest celebrity, is visited by persons of all rank, and from all parts. This high admiration is however not confined to the partial eye of the native Indian; it is beheld with no less wonder and delight by those who have seen the productions of art in various parts of the globe."

William's Journal records, 20 January 1789, "...The Tents were pitched immediately opposite the Tage Mahl. Un & self drawing from it most of the Day. The artist were very impressed by the view of the monument across the river Jumna.

The Taj Mahal was erected by the Mughal Emperor, Shah Jahan, as a mausoleum for his beloved wife, known as Mumtaz Mahal, who died in 1629."

Copyright no longer applies. 75 years after the artist's death in most countries and 100 in some.

Where were all those semi precious stone at the Taj Mahal? Also disappeared like the Mayans n Incas! ?????

Was the river ever that wide? Here's my more recent image: http://www.gnomeplanet.com/potm/2012_6.php