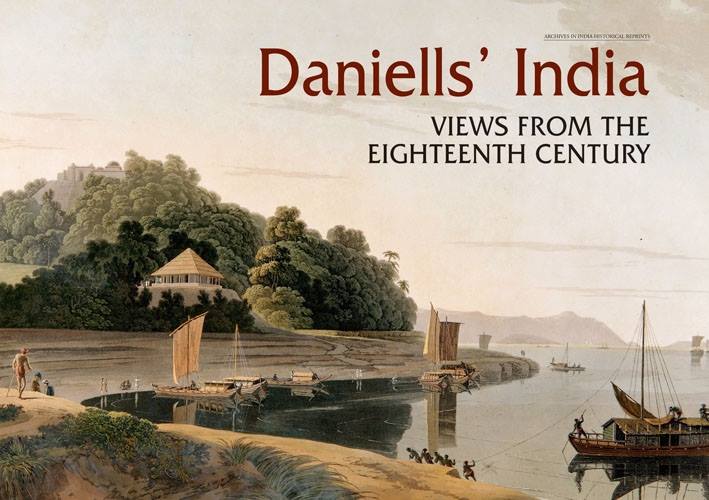 Like hundreds of their countrymen, when Thomas and William Daniell, uncle and nephew, landed in Calcutta in 1786 from the far shores of England, their eyes must have been dazzled by the intense glare of a tropical sun they had never seen before. Yet, nearly all the paintings the duo made of various towns and landscapes during their sojourns across India are suffused with a singularly melancholic glow.
In the spectacular “views” of India that the Daniells captured, it is always twilight hour, like the “always afternoon” lull that entraps the “Lotos-eaters” in Alfred, Lord Tennyson’s eponymous poem.

Was it the Daniells’ longing for home, the remembrance of dull grey English weather, that got reflected in these pale skies? How did they manage to capture that leaden heaviness overhanging the musty Indian air with such sharp intensity?

Culled from the National Archives of India and introduced by eminent art historian B.N. Goswamy, Daniells’ India: Views From the Eighteenth Century brings together a collection of exquisite aquatints by the Englishmen in a magisterial, though slightly unwieldy, volume. Chronicling the everyday life of 18th century India, these images are mesmerizing in their attention to detail, faithfully recording the grandeur of indigenous architecture alongside the gentle hum of daily life.

Read more of this book review:


Buy this book on Flipkart:

This book is for sold ?

More details in comparaison with the book of Martinelli ?

Yes! I got my copy just today from Flipkart!

Or buy at Sotheby's for half a million dollars ( http://www.paulfrasercollectibles.com/News/BOOKS-%26-MANUSCRIPTS/Daniells%27-Oriental-Scenery-sees-35pc-increase-on-estimate-at-Sotheby%27s/13290.page )

Unlike Antonio Martinelli's pioneering work to photograph the Daniell paintings in the exact locations of today... this book is essentially a collection of the Daniell plates in large size (12 in. x 17 in.). Beautifully printed and a great collector's edition. in one word...sumptuous!

Alas... we have to make do with this copy!

I've got the original 6 part first-edition . Small folio, though - not the large one that sold at this auction. Want to buy it for a discount ? quarter million wl do ...ha ha ..

NIYOGI BOOKS have done a wonder with B. N. Goswamy 's introduction of this essentially a collection of rare items of the Daniell plates in large size (12 in. x 17 in.). Beautifully printed and a great collector's edition. Congratulation to Bikash Neogy and your team

RBSI, any idea how it compares to Mildred Archer's book Early Views of India, on the Daniells and their paintings?

Meera Iyer: This book is a collection of large plates with an introduction by BN Goswamy. No further written material. Its a sheer delight to see large size 'replica' prints of the Daniells.