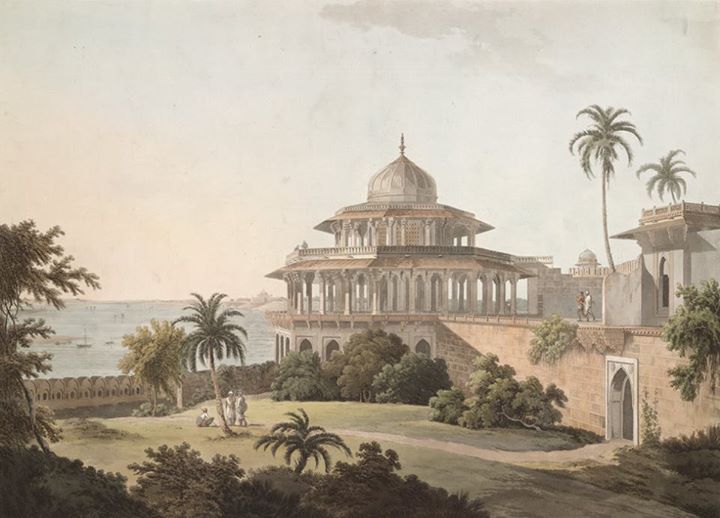 Plate 6 from the first set of Thomas Daniell's 'Oriental Scenery.' Of all the British artists who went to India in the 18th and 19th Centuries, it is Thomas and William Daniell who are the best known. Their work gives us a visual record of late 18th century India that no other source can match. Some of their most important work shows buildings which have now vanished forever, even before the age of photography, such as this wonderful airy 'forty-pillared' pavilion perched on the wall of the Allahabad fort overlooking the river Jumna, constructed when the Emperor Akbar was building the fort in the 1580s.

Rubbish. This forty-pillared building still stands. Even though, Colonel Kyd did kill part of its "wonderful airiness" by blocking some of it, to use it for arms storage.The forty-pillared ( chalees sutton) building of Isphahan in Iran, is pretty neat too.Indo-Iranian architectural exchange.

The Daniells set out to India about a year after the founding of the Asiatic Society in Calcutta, and with the latter, contributed to a faithful recording of historically important landscapes. In the spirit of the example given here, one of the very few accurate and accessible renderings of the Qutb Minar before the damage inflicted on it in 1803 is afforded by Daniells' works. The "large stone harp" of a cupola, unflatteringly alluded to by Major Smith and which was destroyed by lightning that year, could be seen in a couple of their lithographs, one of which is at http://bit.ly/19Yw3Fy. Ironically, Smith's replacement of his own design was considered as incongruous and was later taken down. The Daneills arrived in India with a passion for the Romantic movement in landscape painting that had gained currency in England, and during the latter's ascendency in subcontinent. Their works, executed with more of a scientific temper than their predecessors like Hodges, and at a time of nascent but vigorous urges to explore and decipher the Orient gave them the popularity they hold to date. Upon their return, William Daneill, on account of putting in 12-hour days at producing lithographs from their collection of on-site drawings, became on of the foremost engravers of his day.