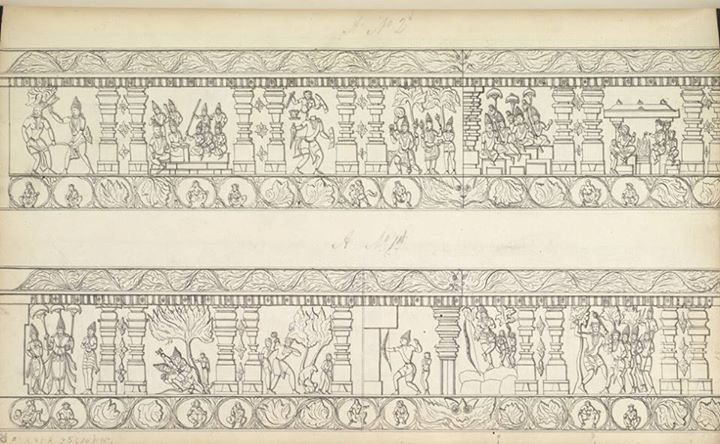 
Image:
Narrative sculpture on the north side of the Amritesvara Temple at Amritpur, 1805. Fourth panel of the Mahabharata frieze.

Pen-and-ink drawing of the fourth narrative sequence of the Mahabharata carved on the open hall of the Amriteshvara temple at Amritapura in Karnataka. This drawing is taken from an album of 156 drawings (185 folios) chiefly of architecture and sculpture in S. India, dated 1803-08. Some drawings are by MacKenzie himself, others by his assistant surveyors and draftsmen, including H. Hamilton and J. Newman.

The Amriteshvara Temple at Amritapura, located 110 km from Hassan, is a beautiful example of Hoysala architecture decorated with fine sculpture. An inscription records the building of the temple in 1196 AD. The Hoysalas were prolific temple builders and during their rule (circa 1006-1346) they built nearly 700 monuments in Karnataka. The Amriteshvara, which is dedicated to Shiva, consists of a sanctuary with its tower, a vestibule, a closed hall, and a large open hall. The open hall is approached through entrance porches in the four cardinal directions. It has half-open walls with slanting seat-back remarkably carved with narrative panels from the Hindu epics of the Ramayana, Mahabharata and Bhagavata Purana. On the north face of the porch of the open hall 36 panels illustrate episodes from the first three books (Adi, Sabha and Vanaparvan) of the epic of the Mahabharata which tells the story of the war between the two families of the Kauravas and Pandavas for the kingdom whose capital was Hastinapura. This great epic is attributed to Vyasa and traditionally dated circa 400 BC-400 AD. The sequence of the scenes is from right to left. Each scene is framed and separated by pilasters and floral motifs. This drawing depicts the sequence of the panels 25-36. The scenes represent, from right to left and from top to bottom: Yudhisthira's rajasuya sacrifice; the Kauravas and the Pandavas watching the sacrifice; Krishna is honoured; Krishna releases the disc and Shishupala is decapitated; the Kauravas and Pandavas playing dice; Duhshasana undresses Draupadi; the Pandavas in exile fight a demon; Arjuna performs penance on the Indra-kila; Arjuna shoots the boar; Shiva shoots Mukasura; the fight between Shiva and Arjuna; Shiva bestows the Pashupata weapon on Arjuna.

Amruteswara temple in Hassan district is yet another beautiful temple of the Hoysalas.