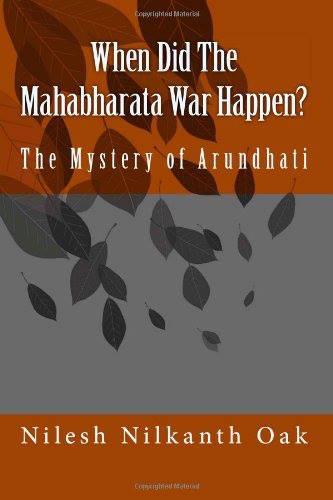 New Book:
When Did The Mahabharata War Happen?
By Nilesh Nilkanth Oak
Published by Danphe Inc. - 2011

How a theory based on single unifying idea corroborates 100+ astronomy observations.

Where to search for the year of the Mahabharata War – Epoch of 6500 years & Compact time interval of 3000 years.

How a single observation, previously known but unexplained, falsifies 96% of all proposals for the year of the Mahabharata War.

Why does it matter how long Bhishma was lying on the bed of arrows.

How ancient is the tradition of meticulous astronomy observations.

Acceptance of his theory leads to surprising conclusions about our current understanding of world civilizations, domestication of horses, dating of Ramayana or Vedas and antiquity of meticulous astronomy observations. Rejection of his theory would compel us to search for the likes of Newton and Lagrange, among the Sages of India, at least thousand years before Sir Isaac Newton & Joseph-Louis Lagrange

The author's blog with a link for a book discount:

Good recent note on varnam blog, on the topic ( http://varnam.nationalinterest.in/2013/05/mahabharata-date-based-on-archaeology/ )

To say that Arundhati walked ahead of Vashishtha or behind 'him' is one and the same thing depending on which way each (as a person) is facing! The two, If walking in the same direction were to do "about turn" military style, the one who was leading will now appear to be following the other! It is now known that Arundhati/Vashishtha are only a visual (optical) binary system meaning that they do not move around the same center of mass. the two stars are separated by about 3 light years.