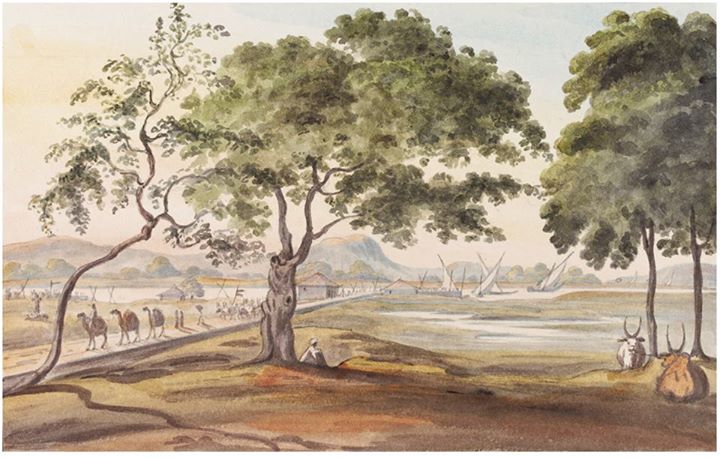 This painting depicts a road leading inland from the sea. There are camels on the road. In the distance is a landscape, sea and ships. Bullocks sit under the trees in the foreground.

Once travellers had hired horses and baggage camels from the Panvel Tavern, they would begin their journey inland. In this painting Panvel pier is in the background. Today, because of its closeness to Mumbai, Panvel is a rapidly growing city.

Sir Charles Harcourt Chambers (1789-1828) was appointed Puisne Judge of the new Supreme Court, Bombay in 1823. He was knighted by George III and became acting Chief Justice of Bombay in August 1828, two months before his death. In his spare time, Chambers was an accomplished amateur watercolour painter of landscapes and riverscapes and journeyed regularly across the harbour to Panvel on the mainland. He also explored the nearby region of the Konkan and Western Ghats, and his pictures were clearly executed on the spot as he travelled. He repeatedly painted the forts, hills and pinnacles, often including trees and vegetation to enhance his compositions. He had considerable skill in capturing atmospheric effects, and his scenes have a distinct sense of reality. It was Chambers himself who probably inserted the pictures into three albums (IS.21 to 23-1994) by slitting the leaves and placing them mostly on separate pages. They are mostly in pencil and watercolour, with a few drawings in pen and ink or pencil. Besides views of Western India, the albums contain a few paintings of London and scenery in England, Scotland and Wales. This picture depicts Panvel bunder (pier), with baggage camels, adjoining the River Panvel in the Kolaba District of Bombay.

what a changed in panwell ,today and privious !