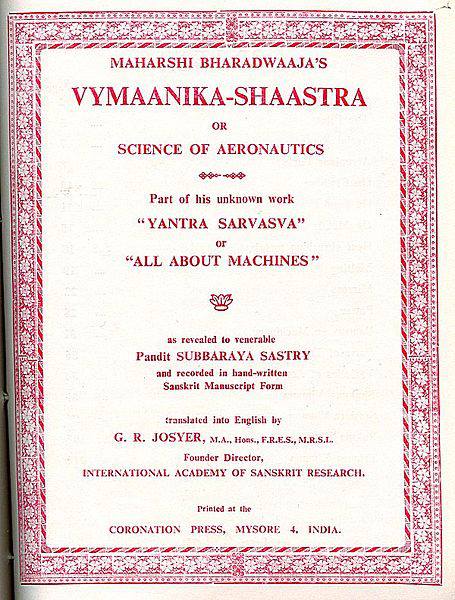 The Vaimānika Shāstra ( वैमानिक शास्त्र, lit. "shastra on the topic of Vimanas"; sometimes also rendered Vimanika, Vymanika) is an early 20th century Sanskrit text on aeronautics obtained by psychic channeling and automatic writing. It makes the claim that the vimānas mentioned in ancient Sanskrit epics were advanced aerodynamic flying vehicles, similar to a rocket.

The existence of the text was revealed in 1952 by G. R. Josyer who asserted that it was written by Pandit Subbaraya Shastry (1866–1940), who dictated it during the years 1918–1923. A Hindi translation was published in 1959, while the Sanskrit text with an English translation was published in 1973. It contains 3000 shlokas in 8 chapters which Shastry claimed was psychically delivered to him by the ancient Hindu sage Bharadvaja.The text has gained favor among proponents of ancient astronaut theories.

J. B. Hare of the Internet Sacred Text Archive in 2005 compiled an online edition of Josyer's 1973 book, in the site's "UFOs" section. In his introduction, Hare writes:

The Vymanika Shastra was first committed to writing between 1918 and 1923, and nobody is claiming that it came from some mysterious antique manuscript. The fact is, there are no manuscripts of this text prior to 1918, and nobody is claiming that there are. So on one level, this is not a hoax. You just have to buy into the assumption that 'channeling' works. ... there is no exposition of the theory of aviation (let alone antigravity). In plain terms, the VS never directly explains how Vimanas get up in the air. The text is top-heavy with long lists of often bizarre ingredients used to construct various subsystems. ... There is nothing here which Jules Verne couldn't have dreamed up, no mention of exotic elements or advanced construction techniques. The 1923 technical illustration based on the text ... are absurdly un-aerodynamic. They look like brutalist wedding cakes, with minarets, huge ornithopter wings and dinky propellers. In other words, they look like typical early 20th century fantasy flying machines with an Indian twist.

Incredible! Can it also be downloaded?

Unable to find a downloadable copy.

I don't think this is a rare book but one full of hocus-pocus.

just google the words and write PDF at the end ...yes, you could download, I have a copy with me

This work has been proved to be a fraud. Please don't dilute the quality of the excellent postings with books of dubious value.

I agree with you. But I have had many requests for this work in the past few months. I have therefore posted the following scientific study immediately after Vaimanika Shastra to provide the right perspective to this work of probably pure fantasy... Scientific opinion: A critical study of the work - VYMANIKA SHASTRA By H.S.Mukunda, S.M.Deshpande, H.R.Nagendra, A.Prabhu and S.P.Govindaraju Indian Institute of Science, Bangalore - 1974 Read and download pdf: http://bit.ly/13Licfs

If it has been proven a fraud, please provide link to that too, so th readers can decide for themselves. Otherwise it id plain and simple a judgement.

Please read the critical review by IISc scientists. Also read a bit about the person who wrote this book. If at the end of it you still believe this work of fiction, Ramar Pillai's herbal petrol is still available for purchase. Readers are free to believe what they want, and I don't want to spoil anyone's fantasy.

really this is a rear collection.can u pls explin the details of search.how i download this?

by which way it is oroved frud inform to readers for good intrest of readers pl.

It is a rare book. Try finding the original copy.

When the said vehicles are said to violate the Laws of Motion by which the entire planetary system is regulated, I needn't say more. When the author is a psychic who claimed that Bharadwaja Muni channeled his ideas and shlokas to him in 1900 or so, I needn't say more. This is the 21st century we are living in.