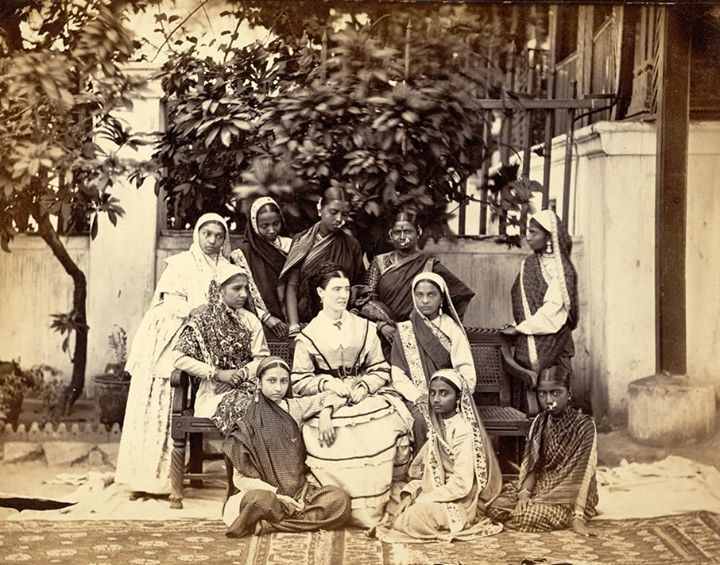 Group of mistress and pupils of the Government Normal School, Bombay - 1873

Photograph of a group posed in front of the Government Normal School at Bombay, in Maharashtra from the Archaeological Survey of India Collections: India Office Series (Volume 46), taken by an unknown photographer in c. 1873. This image, which was probably shown at the Vienna Exhibition of 1873, shows the European mistress seated in the centre of a group of ten female pupils. Normal schools trained teachers and The Imperial Gazetteer of India states, "In the case of primary teachers and the lower masters of secondary schools the courses of study and the examinations are organized by the Local Governments, and central and District schools are maintained for their instruction by the Government, and in some cases by local boards and missionary societies...Stipends are frequently given to the pupils, who then bind themselves to teach for a specified period. The courses include general and technical subjects and practical training." The number of female Normal schools increased greatly after 1871 in response to the growth in female primary and secondary education in India.

Sanchia, are some of the ladies sporting gaaras? They look kind of dark-skinned to be Parsis, though.

I wish to photos og govt high school shikarpur sindh,that was established in 1874.

There must've been some 'abnormal' schools too...

A normal school makes sure that teachers are up to standards or norms. Think of it as norm-al with the word norm rather than as the word normal, if that makes sense!

And I thought the National Curriculum was too restricted...

What is normally considered the knowledge one needs to advance.

She would have kicked me out !

The book by Malavika Kalrekar Revisiting the past through photography throws a lot of light on Women's education in India .The Zanana Mission too contributed a lot to women's education at a time when women were not allowed to be exposed to especially western education

Good to see Pew Simon back at midnight erudition. Thanks. Enlighten us more.

Dhruva babu missing you and my cerebral activities in kolkata