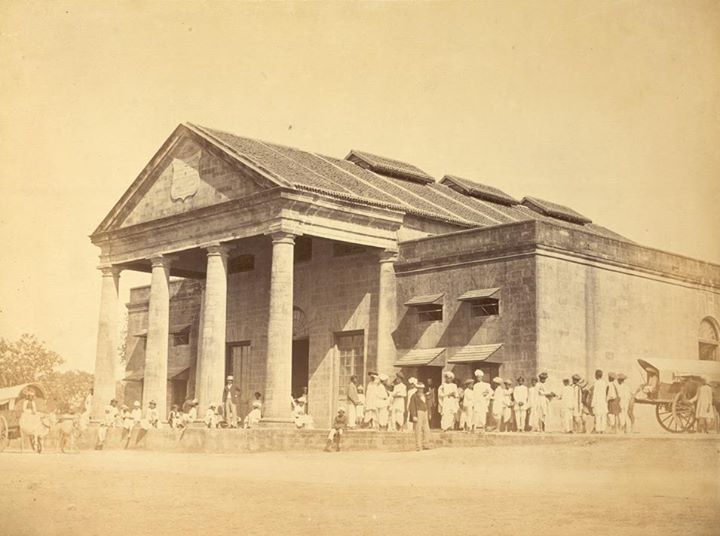 Photograph of the exterior of the Free Church of Scotland Mission School at Nagpur in Maharashtra from the Archaeological Survey of India Collections: India Office Series (Volume 46), taken by an unknown photographer in c. 1870. This is a view of the main façade, in classical style with a pedimented tetrastyle Tuscan portico, with pupils and teachers posed informally along the front of the building. Alexander Duff, the first Free Church of Scotland missionary appointed to India, arrived in the country in 1830. Mission schools were important in India, particularly for the education of girls and women, for those who were at the lower end of the caste system and for technical education. The Imperial Gazetteer of India states, "Much assistance has been given to the cause of female education by mission schools and mission classes for home teaching. The promotion of education among children of the lowest castes, both male and female, is a matter of peculiar difficulty...[quoting Baines 'Report on Material and Moral Progress of India' (1891)] 'Special schools are therefore maintained where the excluded classes are of numerical importance and a great deal has been done in this way by Christian missionaries, who, especially in Madras, have made a special point of raising the status of what are conventionally, though, incorrectly, termed the outcast population.'...[regarding industrial schools] A few of the most important are managed by Government, some have been established by missionary societies or private benefactors. Many of the mission and private schools are aided by grants from public funds awarded on the results of industrial tests."